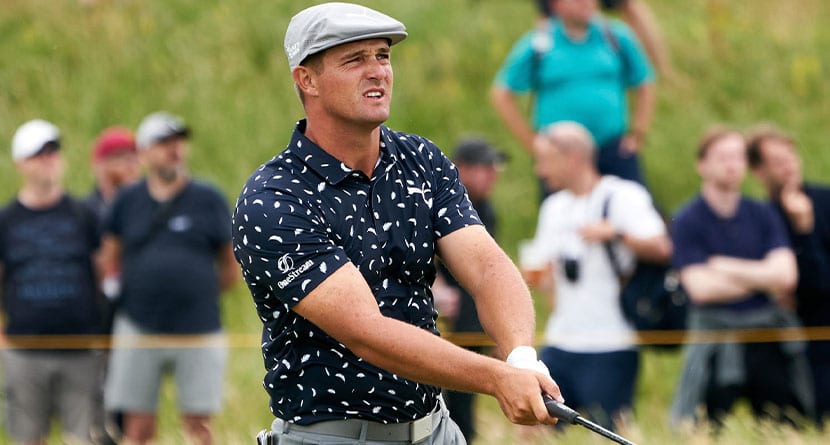 It’s always something with Bryson DeChambeau.

For someone who began his week rather earnestly claiming to not enjoy controversy, DeCheambeau found himself embroiled in a fair bit of it Thursday afternoon at The Open Championship after shooting an uneven round of 1-over par to begin the final major of the year.

“For me, I’m somebody that doesn’t necessarily like controversy. I just like doing my own thing,” DeChambeau foreshadowed on Tuesday. “Do I like showcasing something unique and different? Yeah, but I guess what comes with that is controversy, and I guess that’s something that I don’t necessarily deal the best with sometimes.”

While the response stemmed from  a pre-tournament press conference littered with questions about the ongoing feud between DeChambeau and Brooks Koepka, DeChambeau stuck his foot squarely in his mouth when discussing a frustrating first round, taking, of all potential scapegoats, his equipment company to task for failing to provide him with a driver that was up to his standards.

“If I can hit it down the middle of the fairway, that’s great, but with the driver right now, the driver sucks,” DeChambeau said after a round that saw him hit just four fairways. “It’s not a good face for me and we’re still trying to figure out how to make it good on the mis-hits. I’m living on the razor’s edge like I’ve told people for a long time.

“When I did get it outside of the fairway, like in the first cut and whatnot, I catch jumpers out of there and I couldn’t control my wedges. It’s quite finicky for me because it’s a golf course that’s pretty short, and so when I hit driver and it doesn’t go in the fairway, it’s first cut or whatever, or it’s in the hay, it’s tough for me to get it out on to the green and control that.”

No holding back from @b_dechambeau on his golf today at #TheOpen pic.twitter.com/T39wWG17wb

The two-question post-round interview included a follow-up in which DeChambeau attempted to kick-save a blatant shot across the bow at Cobra, the equipment company that pays him millions of dollars per year to play his equipment, including the RadSpeed driver, which has been tweaked specifically for DeChambeau.

“I’ve realized this for years now. This has happened since 2016-17 when players stopped drawing it. There’s not very many golfers that draw it anymore,” he said. “It’s not because of spin rate. It’s not. It’s literally the physics and the way that they build heads now. It’s not the right design, unfortunately, and we’ve been trying to fix it and Cobra has been working their butt off to fix it, we just haven’t had any results yet.”

DeChambeau’s comments caused an immediate stir among fans and media as the typical player-manufacturer frustrations boiled over into the public domain. However, perhaps even more surprising than DeChambeau’s comments was the rebuttal from Ben Schomin, Cobra’s Tour operations manager.

Schomin, who had coincidentally been the fill-in caddie for DeChambeau two weeks earlier in Detroit, was contacted by Golfweek’s David Dusek for comment early Thursday morning in the U.S., and he didn’t hold back.

“Everybody is bending over backwards. We’ve got multiple guys in R&D who are CAD’ing (computer-aided design) this and CAD-ing that, trying to get this and that into the pipeline faster. (Bryson) knows it,” Schomin said. “It’s just really, really painful when he says something that stupid.

“He has never really been happy, ever. Like, it’s very rare where he’s happy. Now he’s in a place where he’s swinging a 5-degree driver with 200 mph of ball speed. Everybody is looking for a magic bullet. Well, the magic bullet becomes harder and harder to find the faster you swing and the lower your loft gets.

“We know as adults that they really don’t mean that and I know that if I got him cornered right now and said, ‘What the hell did you say that for,’ he would say that he was mad. He didn’t really mean to say it that harshly. He knows how much everyone bends over backwards for him, but it’s still not cool.”

Predictably, there was a damage-control apology from DeChambeau later Thursday afternoon.

“The comment I made in my post-round interview today was very unprofessional,” DeChambeau said. “My frustration and emotions over the way I drove the ball today boiled over. I sucked today, not my equipment. Cobra and I have worked together for over five years and they are some of the hardest working people in (the) golf industry and make an incredible product.

“Their team is like family to me, especially Ben Schomin who has been there for me every step of the way since I started my career. I deeply regret the words I used earlier.

“I am relentless in pursuit of improvement and perfection. Part of that causes me to become outwardly frustrated at times. With the new speeds I am obtaining, my game is a constant work in progress and so is controlling my emotions.”