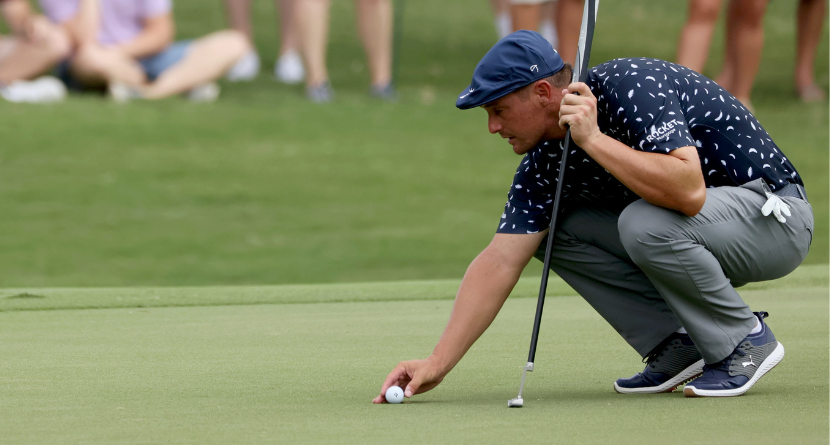 Citing his relationship with the rival LIV Golf Series, Bridgestone Golf gave Bryson DeChambeau the boot on Tuesday, according to multiple reports.

The 2020 U.S. Open champion had endorsed the brand’s golf balls since 2016 and signed a longterm extension just two years ago.

The timing is, of course, suboptimal with the Open Championship just days away; DeChambeau is free to keep using the ball but will do so without any contractual obligation.

“The PGA Tour is an extremely important part of professional golf, and Bridgestone has a sports marketing relationship with this highly visible series of tournaments,” Bridgestone said in a statement given to Golf.com’s Jonathan Wall. “In considering that Bryson DeChambeau will no longer be participating in these events, Bridgestone and Bryson have agreed to end their brand ambassador partnership.”

DeChambeau has had run-ins with his own equipment manufacturers before, and they predate his relationship with the Saudi startup league. About a year ago, after missing all but four fairways in the first round of the Open Championship at Royal St. George’s, DeChambeau said of Cobra, his club manufacturer, “the driver sucks right now.”

He soon walked back his statement.

At the time of his extension with Bridgestone, DeChambeau — who’s well known for his science-based, soup-to-nuts approach to game improvement — stated his intention of acting as the true face of the company.

“I’ve seen a lot of other guys sign up just to be spokesmen for a brand and collect a check,” DeChambeau said. “I have a much deeper role in mind with Bridgestone. I want to be a bigger part of their R&D process and help develop golf ball technology for the future of the game while pushing the limits of golf ball designs to benefit the full spectrum of players.”

After making his debut in the LIV Golf Series’ Portland event earlier this month, DeChambeau joined 23 other former PGA Tour members to earn indefinite suspensions for their participation in a competing tour event.