Brooks, Bryson Ratchet Up Trash Talk Ahead Of The Match V 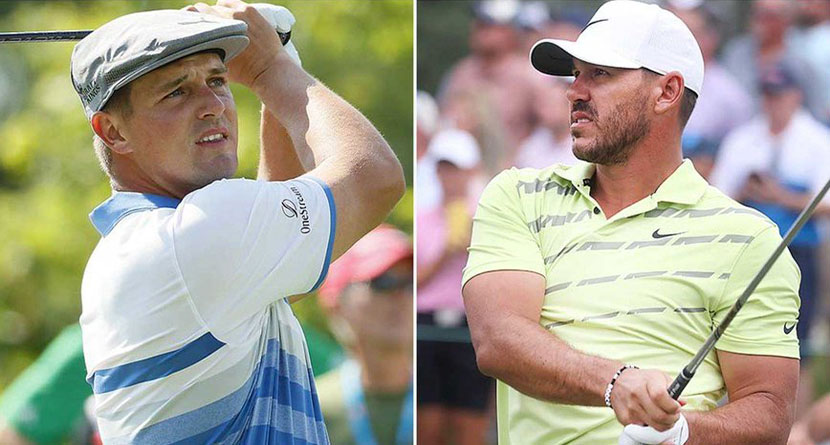 For a lot of golf fans, the announcement of The Match V, the made-for-TV match between Brooks Koepka and Bryson DeChambeau, which will tee off on Black Friday, Nov. 26, 2021, at 4 p.m. EST, was a letdown of sorts.

Was this always the end game? Were Koepka and DeChambeau manufacturing this whole feud for a payday before the holidays?

For the last two years, Koepka and DeChambeau’s ships were headed in very different directions, only to reverse course and come together for a common goal? It felt… cheap.

However, whatever the reason behind the two coming together (read: money), the simmering tensions may still be bubbling under the surface as the two didn’t hold anything back on a conference call earlier Thanksgiving week.

“I wouldn’t put much on a forced hug,” Koepka said, referencing the Match V’s embrace following the U.S. Ryder Cup victory in September.

DeChambeau agreed, and that’s when the pair started taking shots at one another.

“It was definitely a little forced,” DeChambeau said. “The team wanted us to do it, and to be honest I was surprised he did it. But I’m a guy that can put things behind me pretty quickly when you apologize and then we can move along. But it definitely felt forced, there wasn’t an apology or anything like that. Until I get an apology for what he’s said and whatnot, nothing will change.

“This is all real on my end. It’s disgusting the way the guy has tried to knock me down. There’s no need for it in the game of golf, he’s just tried to knock me down at every angle, every avenue. For what reason, I don’t know. Maybe it’s because he’s jealous and wants to get a part of that PIP money from the tour. That’s probably a part of it, because it was squashed until that was announced.”

Now, we’re getting (back to) somewhere with this rivalry. And like any fun public quarrel, both sides are completely ignoring the other side’s point of view. DeChambeau is demanding an apology from Koepka, who has been clear he’s waiting on an apology from DeChambeau.

“I’ve said it like 10 different times, I’ve never really liked him,” Koepka said. “I think we played together maybe when he was an amateur at Augusta, that was the only time that I can think of that we ever played. We didn’t get along there, didn’t get along since he got out (on Tour), and then he said that stuff to Rick and I just thought it was crap. You don’t go ask my caddie to say something to me. Just come to me. Don’t be a little baby about it. I think he’s learned his lesson.”

With them back on level standing with regards to how they feel about one another, the trash talk for Friday’s match coming to the forefront towards the end of the call.

“He’s been lacking a bit recently,” DeChambeau said, referring to Koepka’s two recent missed cuts. “I’m happy for him that he signed with Srixon, wink wink.”

“With all that’s gone on the last two years, eventually it was going to come to this,” Koepka said. “That way, somebody will have the bragging rights at the end of this and somebody won’t. I’ve already won the trash-talking point, I think that’s a given. So now it just comes down to playing golf, because obviously no one will put us together. So we’ve got to do it on our own.”