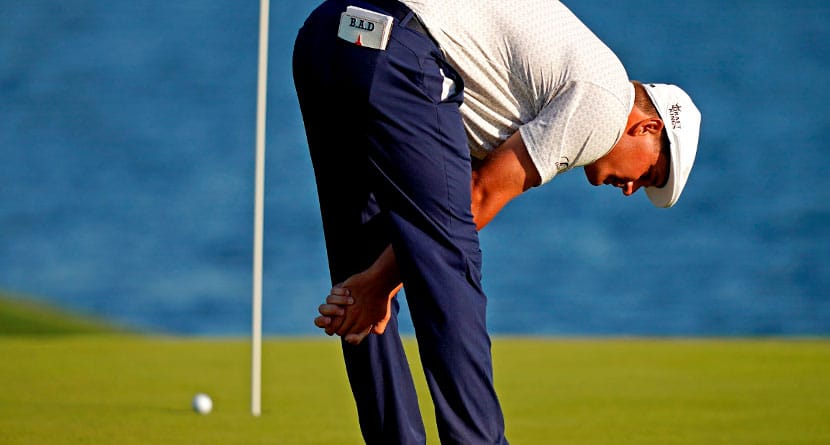 The amount of money that changes hands on any given Sunday afternoon on the PGA Tour is jaw-dropping, but with The Players Championship’s $15 million purse and players duking it out down the stretch near the lead, those dollar signs loom large when a win is out of the question.

As it turned out, Lee Westwood and Bryson DeChambeau — along with Brian Harman, who was an innocent, but invested bystander — had little more to play for coming up the 18th hole at TPC Sawgrass than an inflated payday.

Ahead of the final pairing, Justin Thomas had gotten away with a bold line off the tee and reached the green from 124 yards, giving himself two putts from 26 feet to hold onto a two-shot advantage. Both Westwood and DeChambeau had the unenviable task of needing to hole out their second shots on one of the more difficult closing holes on the PGA Tour.

Unsurprisingly, neither got within 14 feet with their approaches, setting up a pair of huge-money putts. Hanging in the balance? $750,000.

A solo second-place finish paid $1,635,000, solo third paid $1,035,000 and fourth-place paid $735,000, meaning everyone was going home happy, but someone was going to go home happier. With DeChambeau first to putt from just inside 19 feet, he could have momentarily taken solo second place.

Even with his miss and assuming a Westwood miss, DeChambeau, Westwood and Harman would have split second and third and fourth-place money, with each of them earning $1.135 million for joint runner-up. But Westwood was nails on the 72nd green, knocking his 14’9″ birdie putt right in the middle.

As it turned out make earned Westwood an additional $500,000 and cost DeChambeau and Harman $250,000 each as they stood by helplessly.

“The week has been great,” Westwood said after the ound. “I didn’t play my best golf today by any stretch of the imagination, but I battled it out. I was proud of myself for that. People question whether I can hole putts under pressure, and I rolled in a lot of must-make putts all day, really, whether it be for par or the great birdie on 14.

“Good par putts on 15 and 16 — I had a three-putt at 17, but it’s a tough two-putt up that hill, and then I rolled in one at the last, which is a little bit of justification for sticking with it.”

A little bit of justification and a whole lot of money.