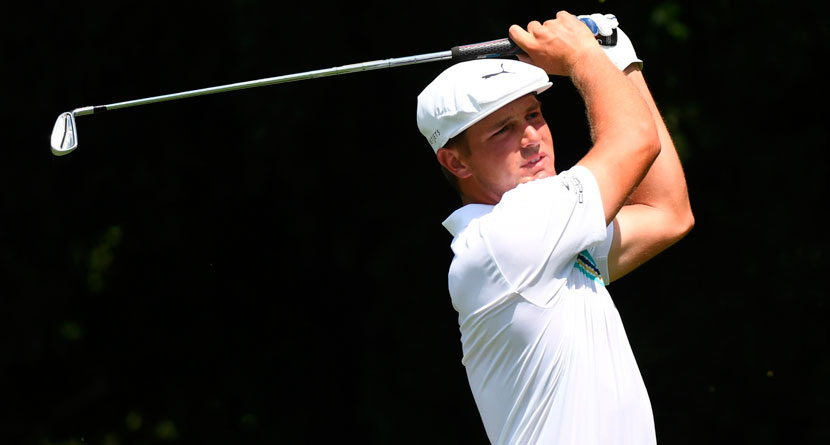 Apparently dramatic physical transformations are the trend du jour on the PGA Tour these days.

First, Phil Mickelson is showing up in beach pictures shredded and hitting drivers out of bushes looking like a completely different person, and now Bryson DeChambeau has vowed to change his physical appearance by the next time he shows up at a Tour event.

After shooting the round of the day on Sunday at the Shriners Hospitals for Children Open with an 8-under par 63 to vault up into a tie for fourth place, DeChambeau proclaimed to the assembled media that he’s taking some time off in order to bulk up and gain some distance.

“I might play Mayakoba or RSM (at Sea Island), but as of right now I need some time off,” DeChambeau said when asked about his upcoming schedule. “I’m going to come back next year and look like a different person. You’re going to see some pretty big changes in my body, which is going to be a good thing. Going to be hitting it a lot further.”

The next time you see Bryson DeChambeau you might not recognize his figure.

“I’m going to come back next year and look like a different person,” he said. “Bigger, way stronger.” More from @NickMentaGC: https://t.co/LO7uGOEPg0 pic.twitter.com/OiHiSQiPDs

DeChambeau ranked 34th in driving distance in 2019, ahead of players such as Justin Thomas and Jason Day, so he certainly isn’t lacking distance.

“Bigger. Way stronger,” DeChambeau said before confusingly attempting to clarify. “Not necessarily bigger, but just stronger in general. I am going to look probably a lot bigger, but it’s going to be a fun month and a half off. I have never been able to do this, and I’m going to go do things that are going to be a lot of fun.”

Naturally, with DeChambeau, nothing is as simple as he’s just going to lift more; there’s science involved.

“Greg Roskopf Muscle Activation Techniques. We make sure the neurological threshold is just as high as the mechanical threshold,” he began. “In layman’s terms, pretty much whatever muscle potentially you have, how big and the muscle spindles you have, making you can recruit every single one of them to their full potential throughout the whole range, and training the whole range of motion.

“They’re machines. They’re Prime Fitness Equipment. I use those, and we’re making sure I’m not hurting anything as I go through this process. The reason I have gotten bigger through this whole process is because of Greg Roskopf and his MAT stuff. I can literally be in a massive amount of pain and we can go do a treatment on one of the patterns directly affecting the neurological pain and not have any pain and get back up off the table.

“It’s not your normal PT work. I’ve done it. I’ve broken ribs before. I got a rib out of place when I was 14 and went to physical therapy for the longest time. It was great, but didn’t feel like it ever got better until I started increasing my tolerance levels with weight and strength.

“Once I started doing that I felt like I could tolerate anything. You bring it on and I could tolerate it. So it’s pretty cool what he does. It’s revolutionary in the physical therapy world. We aren’t doing suction cup, anything like that. It’s literally I’ll be injured or hurt in some facet and I’ll go work out to heal it, to make it get better so I can hold that tolerance level.”