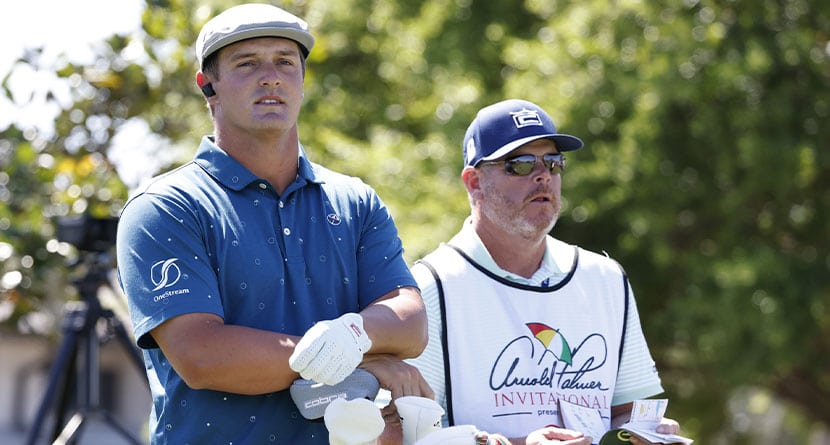 Just hours before Bryson DeChambeau was scheduled to begin his title defense at the Rocket Mortgage Classic in Detroit, reports surfaced that his longtime caddie, Tim Tucker, had quit.

First reported by No Laying Up, Tucker had been with DeChambeau since 2016. The pair parted ways at the end of 2017, but were working together again at the beginning of 2018. Tucker was on the bag for all 8 of DeChambeau’s PGA Tour wins, including his U.S. Open victory last fall.

There have been conflicting reports about the most recent split as ESPN.com’s Michael Collins reported DeChambeau said Tucker had not quit outright but said that he would be taking a break. No Laying Up reported that “they are unlikely to work together again.”

Obviously player/caddie situations are fluid, but my understanding of the situation is, they are unlikely to work together again.

“They had a good run, and they mutually agreed yesterday afternoon to go their separate ways,” Falkoff said. “Everything runs its course. Tim was getting tired and Bryson was getting tired. In any relationship they run their course, and that’s what happened here.

“It wasn’t one specific issue. It was a culmination. Like any caddie-player relationship, they had their ups and downs. They wish each other nothing but the best and will always be there for each other.”

Tucker was working for DeChambeau earlier in the week through practice rounds and the pro-am, but on Wednesday evening the decision was made that Tucker would no longer be on DeChambeau’s bag at least in the near future.

DeChambeau will have Ben Schomin, Cobra Golf’s tour operations manager, on the bag this week at Detroit Golf Club.

Never one to miss a trolling opportunity, as the breakup hit the wire, Brooks Koepka took to social media to twist the knife a bit, dubbing Thursday “Caddie Appreciation Day.”

Couldn’t do it without my guy Rick! Best friend and greatest caddie to do it💯 @RickyElliott appreciation day! pic.twitter.com/cNvD2VX8Nh

DeChambeau opened with an even-par 72 on Thursday with Schomin on the bag, which left him nine shots behind first-round leader Davis Thompson.