Bryson Called Out By Tour Pros For Failing To Yell ‘Fore’ 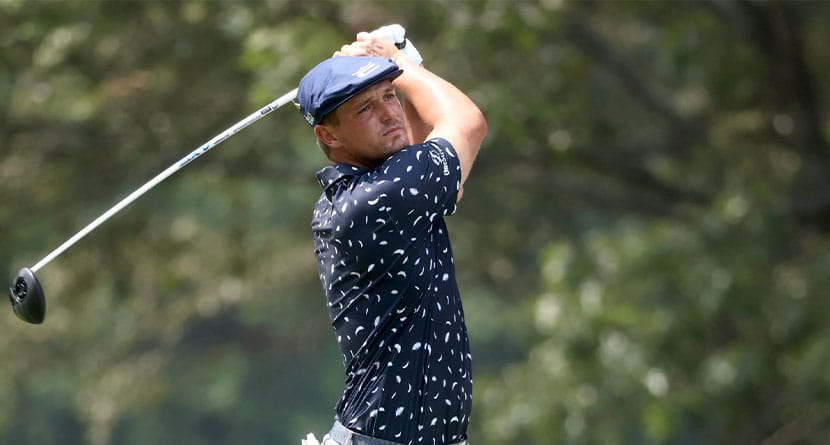 Bryson DeChambeau found himself back in the headlines this past weekend at the WGC-FedEx St. Jude Invitational following his withdrawal to the men’s Olympic Golf competition two weeks ago due to a positive COVID-19 test.

After being taken to task for his comments regarding the COVID vaccine earlier in the week, DeChambeau found himself at the center of another festering controversy that has followed him in recent months: failing to shout fore on wayward drives.

The No. 6-ranked golfer in the world took great exception to the accusation last month at the Open Championship, responding to a question during his press conference defensively, insisting he that he does attempt to warn fans when he hits a wayward shot.

“I do shout ‘Fore,’” he said. “I don’t know what you’re talking about. There are plenty of people on the tee box that do shout ‘fore.’ You’re bringing up a very controversial thing, which is unfortunate. But 99 percent of the time I do [shout], and unfortunately people think I don’t. But that’s OK, they can say whatever they want.”

Obviously under a microscope, DeChambeau was called out by fellow Tour pros at the WGC-FedEx St. Jude Invitational this past week when he appeared to fail to shout the warning during a wayward drive on TPC Southwind’s 18th hole.

It’s I do shout FORE! Honest 🤷🏻‍♂️ @b_dechambeau again🙈🤢🚑 @RickShielsPGA @PeterFinchGolf just hope it’s not a kid one day @PGATOUR should really do something pic.twitter.com/SERLrJF1fk

“Oh my gosh. No shouts of ‘Fore’ and that sounded like…” a commentator trailed off.

The video apparently caught the attention of more than a few people as some fellow Tour pros reacted on social media.

Richard Bland, the European Tour pro who won earlier this year and led after 36 holes at the U.S. Open, was one of the first to comment.

“Bryson ploughing it into the crowd again off the tee and no shout of “FORE.” he wrote. “Maybe it needs someone to get seriously injured for him to learn.”

It shouldn’t be difficult to understand that you should ALWAYS shout “fore” when you hit a shot into the crowds… @b_dechambeau
When is someone going to do something about this? Hopefully before a spectator gets seriously hurt! pic.twitter.com/kSXnEe70XW

“It shouldn’t be difficult to understand you should always shout “fore” when you hit a shot into the crowds,” Molinari tweeted. “When is someone going to do something about this? Hopefully before a spectator gets seriously hurt!”