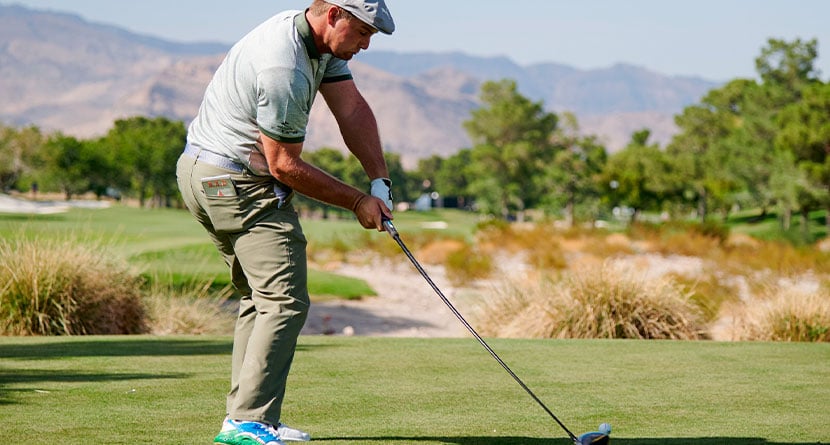 At some point, we should just start taking Bryson DeChambeau at his word.

Towards the end of 2019, he told us that he was going to get in the gym and come back looking like a different person. And he did. Then he told us he was going to attempt to become “the casino” and use massive distance to make courses easier for him. Then he did, winning the 3M Open and the U.S. Open.

And finally, a few weeks ago after a top-10 finish at the Shriners Hospitals for Childrens Open, he said he was taking the next few weeks off to hit “2,000 drivers” and dial in a 48-inch club for next months Masters. He even made his declaration known in a well-produced and product-placement-centric video that ended with the words “The journey to 215 (MPH ball speed) begins.”

Back from training. Time to get ready for the Masters💪 #inspiretobebetter

Over the weekend, he showed that his latest journey is nearing completion once again as he posted to Instagram a picture of some launch monitor numbers that were mind-boggling.

That’s not a typo. pic.twitter.com/iwVNqW0C54

As Brentley Romine of GolfChannel.com astutely pointed out, some of the fine print on the iPad display may have aided the 403.1 carry, most notably a 20 MPH tailwind, but the fact that it appears to have been 56° proves that it wasn’t exactly weather conducive for breaking the 400-yard barrier.

Most notably, however, was the caption DeChambeau included, “Not even the 48-inch driver,” making reference to his previous promises of working on the longer version of his driver.

Just how impressive was this feat? For context, during a college football Saturday, the ESPN Bottom Line showed a graphic of DeChambeau’s 400-yard claim before it updated the field scores at the PGA Tour event taking place in California.

He has said he won’t play either of the next two weeks in the run-up to the Masters, so it appears if we want to keep abreast of what the golf scientist is working on, then we better keep tabs on his social media accounts.