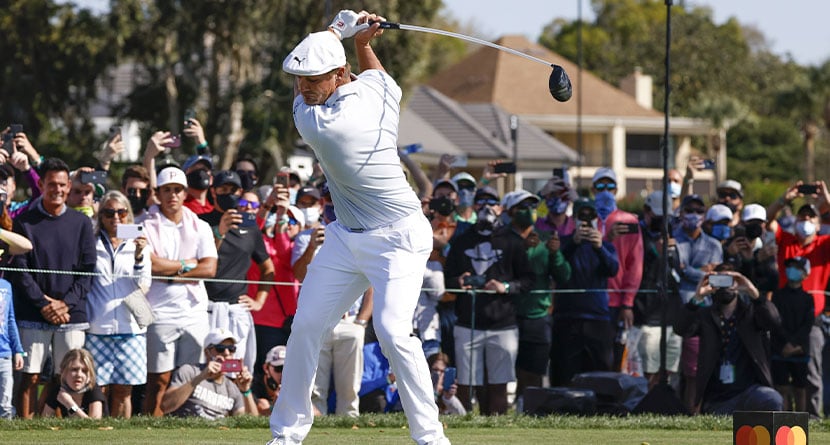 All of those speed training sessions that Bryson DeChambeau has done over the last year and a half are about to bear fruit.

On Monday, DeChambeau announced that he had accepted an invitation from The Professional Long Driver’s Association to compete in the World Championship in Mesquite, Nevada the week after the Ryder Cup, in which DeChambeau officially wrapped up his automatic qualifier spot last week.

“This is an amazing opportunity to grow the game and the sport in general,” DeChambeau said in his announcement social media post. “I want to show the world how incredibly talented and hard working these athletes are.

“I’ve been working hard to get my game up to their speeds so I have a chance but will still continue to play my best golf with my regular day job.”

DeChambeau, who leads the PGA Tour in average driving distance at 321.5 yards, will compete against the longest drivers in the world a week after one of the biggest events on the calendar, the Ryder Cup, which has brought unsurprising criticism to his decision.

“It will not take any of my attention away from the Ryder Cup. I am fully dedicated to the Ryder Cup, and it’s something I really care deeply about. Representing Team USA is something I’ve dreamed about since I was kid,” DeChambeau said. “It’s something I get really amped-up thinking about. I want to help bring home the trophy this year, and like I said, I wouldn’t be doing any of this if I didn’t truly believe it would make me a better golfer.

“I’ve been training with a 48-inch driver since before I won the U.S. Open because it allows me to train myself to swing the club faster and manage those speeds. I’ve obviously thought about putting it in play, too. I’m planning to do another big (speed training) push before next season to get my on-course speed over 190 mph average where it is currently. I’ll be doing a few more speed training sessions in the lead into the tournament, but overall the training is very similar to what I’m already doing.

“I’m not changing my swing or anything like that. The end result is that it will translate to higher speeds on the course and get me a little better at my day job.”

While DeChambeau’s inclusion will certainly garner more eyeballs to the event — the entire point of the PLDA’s invitation and DeChambeau’s acceptance — recent trends show that the No. 6-ranked golfer on the planet may not be too far off from contending.

At the Shriners Hospitals for Children Open last fall, DeChambeau led the field in driving distance with an average of 363.1 yards. For comparison’s sake, when the PLDA last competed in Mesquite in May, Justin James won the Open Division with a 372-yard drive. James’ longest recorded drive that week was 406 yards.