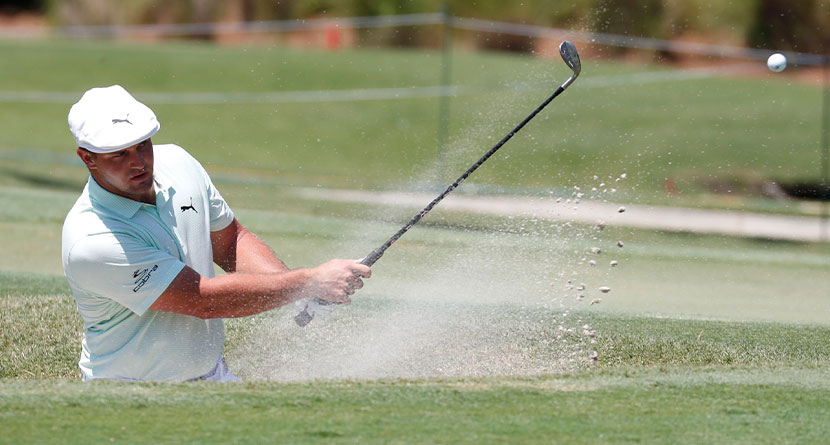 Bryson DeChambeau won on Sunday at the Rocket Mortgage Classic by three strokes in a performance that married his new and improved distance off the tee with a field-leading week on the greens, however a confrontation with a Golf Channel cameraman could be the lasting image of DeChambeau’s week in Detroit.

DeChambeau hit a 335-yard drive on the par-5 7th hole at Detroit Golf Club leaving him just 218 yards to the hole. His approach shot finished short-sided in a a greenside bunker, leaving an awkward and difficult opportunity to get up-and-down for birdie.

DeChambeau knocked his bunker shot some 20 feet past the hole, and upset with himself, took a swipe at the bunker sand, according to GolfChannel.com reporter Will Gray who witnessed the incident.

DeChambeau was running a little hot under the collar through six holes having missed birdie putts of 11 feet and 8 feet already and coming off of a three-putt from 20 feet on the sixth hole, and the nearby cameraman, stationed behind the 7th green took the brunt of DeChambeau’s frustration.

Bryson running a little hot. Caught up with him on 7 where he took a Sergio slash at the sand after splashing out of a greenside bunker, muttered an expletive after missing the par save and spent 60 seconds in a…testy discussion with a cameraman on his way to 8 tee. pic.twitter.com/ENjQt1U689

Gray caught up with DeChambeau after his third round of 5-under par 67 to find out what had happened with the cameraman confrontation.

“He was literally watching me the whole entire way up after getting out of the bunker, walking up next to the green. And I just was like, ‘Sir, what is the need to watch me that long?’” DeChambeau said. “I mean, I understand it’s his job to video me, but at the same point, I think we need to start protecting our players out here compared to showing a potential vulnerability and hurting someone’s image. I just don’t think that’s necessarily the right thing to do.

“As much as we’re out here performing, I think it’s necessary that we have our times of privacy as well when things aren’t going our way. I mean, we’re in the spotlight, but if somebody else is in the spotlight they wouldn’t want that either. I feel like when you’re videoing someone and you catch Tiger (Woods) at a bad time, you show him accidentally doing something, or someone else, they’re just frustrated because they really care about the game. It could really hurt them if they catch you at a potentially vulnerable time.

“We don’t mean anything by it, we just care a lot about the game. For that to damage our brand like that, that’s not cool in the way we act because if you actually meet me in person, I’m not too bad of a dude, I don’t think.”

DeChambeau was roundly lambasted for his opinion on the cameraman’s duty to protect the field, but by none more pointedly than Golfweek.com’s Eamon Lynch who took Bryson to task in a column.

“It’s one of life’s more reliable axioms that if a man has to tell you he’s a good dude, there’s a fair chance he is actually an insufferable gobshite,” Lynch began his column. “Credit DeChambeau’s optimism in thinking that being shown acting like a jerk would hurt his image rather than merely solidify it.”

There’s been a lot said about the media’s role in the branding of professional athletes over the past couple of days. When @b_dechambeau joined @BradFaxon on Monday’s Just the Fax, he was asked about that role and shared these thoughts. pic.twitter.com/DQJSzv8erl

On Monday, DeChambeau doubled down on his stance in an appearance on “Just The Fax,” Brad Faxon’s SiriusXM PGA Tour Radio show.

“I was trying to show, or explain to people that I hope we all have respect for all the players out here because, you know, the guy was videoing me for over a minute after I made my shot and I didn’t understand that,” DeChambeau said. “I hope people realize it’s not a knock on the cameraman at all. I understand he’s doing his job. I love all the cameramen that do their jobs out there, but I just feel like, we need to have a mutual level of respect. That’s all. There’s nothing more to be said.

“I have the utmost respect for them. Hopefully, he has the utmost respect for me and has the forethinking, the foreknowledge to be able to say ‘Hey, look, there’s no reason’ to video me for a minute and a half after I hit a shot. But I get that. We’re all entertainers. They’re doing their job, I’m doing my job the best I can.

“I just felt like he was videoing me, waiting for me to do something bad. But I didn’t. And so I was going, OK man, I’d really appreciate it if you’d, you know, just kind of went off on me, you know, instead of videoing me for a minute and a half after a shot that wasn’t the best.”

DeChambeau is not in the field this week at the Workday Charity Classic at Muirfield Village, but he is expected to play in the following week’s Memorial Tournament.