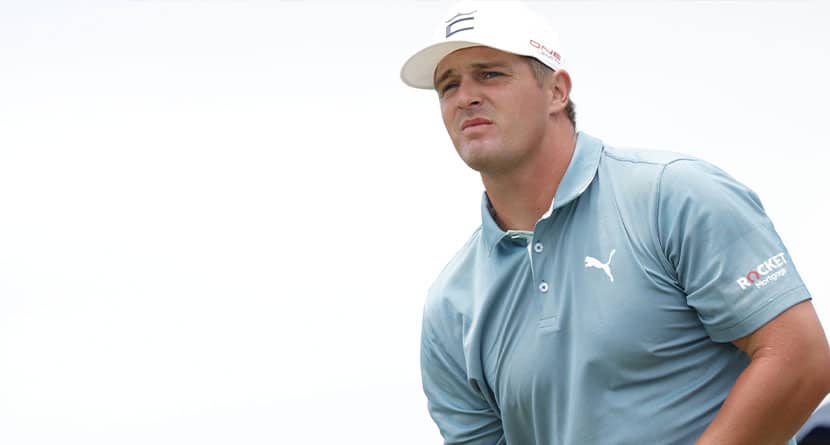 We are not alone, at least according to Bryson DeChambeau.

The undisputed strokes gained: science leader on the PGA Tour, DeChambeau delved into some science-fiction early in the week at Kiawah Island while joining Gary McCord and Drew Stoltz on SiriusXM PGA Tour Radio to detail an encounter he had with three apparent UFOs.

As it tends to with DeChambeau, the golfer conversation drifted into other directions, eventually landing on his belief — or lack thereof — in extraterrestrial life. Naturally, Bryson had a story on deck from his backyard last year.

“In Dallas, Texas, in my backyard, I was looking outside, looking up in the sky and Adam (Hurley, DeChambeau’s friend) was like, ‘what the heck is that?!'” DeChambeau recounted, saying Hurley, himself and his swing instructor Chris Como noticed three white specs in the sky. “We were out there thinking, ‘What the heck is this? They were floating, we thought ‘oh, it’s got to be an air balloon.’

“They were all moving in a triangle shape,” DeChambeau said. “We were out there for literally just under an hour thinking, ‘What the heck is this?’”

“They kept floating to the right, and then all of a sudden one didn’t move and the other two moved away and they went further and further to the right… from that, about 15 minutes in, 20 minutes in they started moving back the other way,” DeChambeau said.

The U.S. Open champ said the trio watched for nearly an hour before he ran inside the house for five minutes. When he returned, what they had seen had disappeared.

“There’s either one person, like a Tony Stark individual, that is doing things that we can’t explain, which is definitely in the realm of possibilities,” DeChambeau said. “I would say the probabilities of that are less than potentially us being future time travelers that are able to come back with technology that we’ve never seen. I mean, that’s definitely a possibility, too.

“But personally, I think that it’s some other life that we don’t understand or know as of right now. I personally don’t think it is other technology that we currently in this dimension understand. Maybe a parallel universe, somebody flipping over and jumping through a wormhole or something and showing us what we got.

“I think more and more people want to know about this and what it could potentially do for our world,” he concluded. “I mean, shoot, if anything it could bring us world peace, really honestly bring us all together, unite us together and just realize that we are a human race. I think it’d be the greatest thing that could ever happen.”