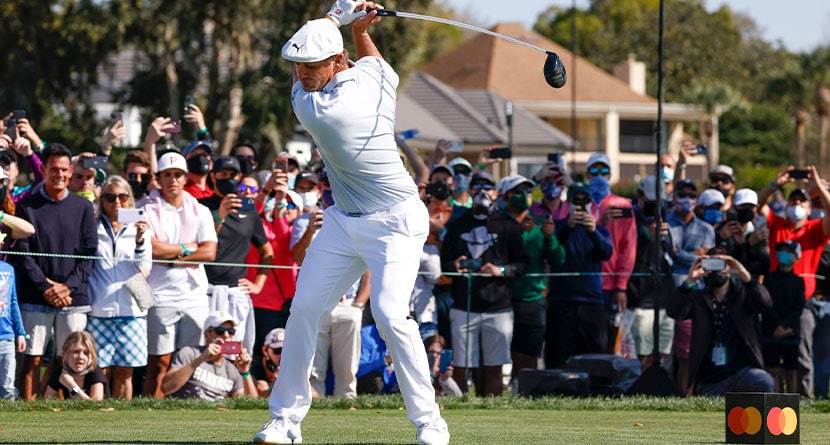 Arnold Palmer’s personal touches are all over The Bay Hill Club & Lodge, host of this past week’s Arnold Palmer Invitational, but it was some additional signage that was put up around on the grounds that spoke most to Bryson DeChambeau.

“You must play boldly to win,” a sign just off the first tee box read. And that’s exactly what DeChambeau did over the weekend to capture his eighth career PGA Tour victory, especially on the par-5 6th hole.

An opening-round 67 and a second-day 71 put the reigning U.S. Open champ in position to contend over the weekend, but the most anticipated part of his first two rounds came and went without much fanfare.

In the lead-up of the event, DeChambeau said he would “definitely” try to drive the par-5 6th green at Bay Hill, a 590-yard par-5 that stretches around a lake, but measures only 340 yards as the crow flies. However, as he headed to the weekend, a difficult and hurting wind had prohibited DeChambeau from pulling driver.

That all changed on Saturday.

The longest drive on the 6th hole since 2003.#QuickHits pic.twitter.com/zkL2jlU8S3

“This is what makes him the most interesting player in the game today,” Paul Azinger said on the NBC broadcast.

DeChambeau’s drive traveled 370 yards on a line just right of the green turning a daunting par-5 into a de facto short par-4. He had only 70 yards in, from which he managed to get down in three shots for a birdie.

After a Saturday 68 left him in the thick of it, the question became whether or not Bryson would take on the shot on a Sunday in contention. With another favorable wind, the big stick came out again.

Drive: 377 yards.
Distance to the pin: 88 yards.@B_DeChambeau does it again at No. 6.#QuickHits pic.twitter.com/HYSyDvQCMm

He again made birdie, this time tying him for the lead with his playing partner, Lee Westwood. From the 6th hole in, DeChambeau played steady, bogey-free golf that left him with a five-foot putt for the win on the 18th green.

An emphatic reaction.@B_DeChambeau is a winner at Bay Hill. 🏆#QuickHits pic.twitter.com/sdohKTXTCB

“It was a lot of fun and I was definitely playing a little bold,” DeChambeau said after the round. “This tournament has been nothing but class every year I’ve been here and the best players come to play and the golf course conditions play like a U.S. Open. I know that’s what Mr. Palmer would like and you have to play boldly to win and I was able to do that and it’s an honor to get it done here finally.”

Bryson played boldly, and he won.