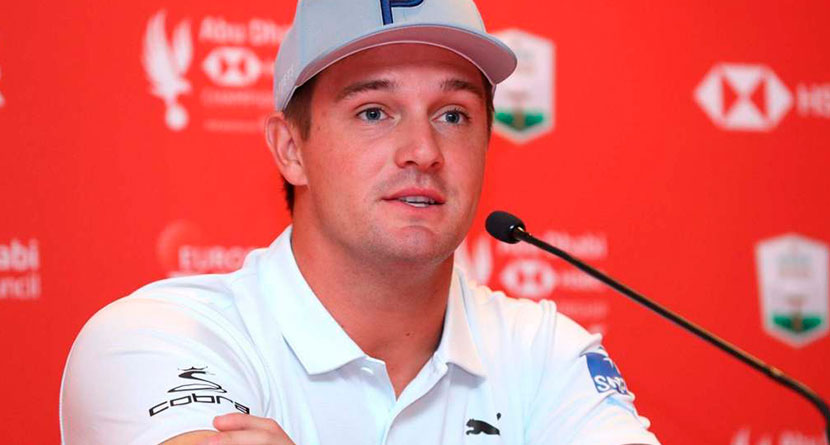 Bryson DeChambeau can be described as a lot of things, but a pessimist isn’t one of them.

Kicking off his 2020 campaign in the United Arab Emirates for the Abu Dhabi Golf Championship, DeChambeau held court in a lively and entertaining press conference that focused on two of the most talked-about topics coming into the new year when it pertains to DeChambeau: slow play and his bulked-up physique.

Leave it to Bryson to link the two seemingly separate topics.


With more stringent pace of play enforcement coming this year on both sides of the Atlantic, DeChambeau said “loves” the idea of the revamped policies.

“I love it. I love it. I told you guys, back on the PGA Tour, when stuff was happening, I told you guys, I welcome it,” DeChambeau said, launching into a verbose answer. “I was playing under the rules and there was no rhyme or reason to be called out, other than the fact that it looked like it was a really, really long time that it took, and it was, absolutely. I’m not saying it wasn’t. But I was playing under the rules at that point in time, and there’s no reason or why I should have been given so much heat, considering other things that had occurred that day and previous days of other people that I played with and other things that occurred.

“It’s just .01 percent of the time that that happens on Tour, which it happens literally with everybody out there. They just caught it on camera at that specific moment in time. To be called out like that was kind of weird, but it is what it is and I take it and I understand it.

“All I’m doing is my absolute best to be better, and that’s what I look forward to this year is, again, like I said, a new me, a new person, and a way that’s going to represent all tours, all golf in general in a positive way to help grow the game. That’s what I’ve always been about is trying to shine a light on the game of golf and not push people away, with developing the one-length irons, having a new way of swinging the golf club and doing all these different things that look weird, but have been a massive benefit to the game, that’s what I’m about. So when considering change like that, I welcome it.”

As for that “new person,” DeChambeau’s work in the weight room since the end of the Shriners Hospitals for Children Open in October was noticeable. DeChambeau said he’s been in the gym twice a day, which has not only improved his strength and clubhead speed, it’s also something that will relate to his relative slow play.

“Considering how far I’m hitting, I don’t think (slow play) will be an issue anymore,” he said.

Q: How much has working out changed @b_dechambeau‘s golf game?

DeChambeau will play alongside Branden Grace and Matthew Fitzpatrick in the first two rounds in Abu Dhabi.