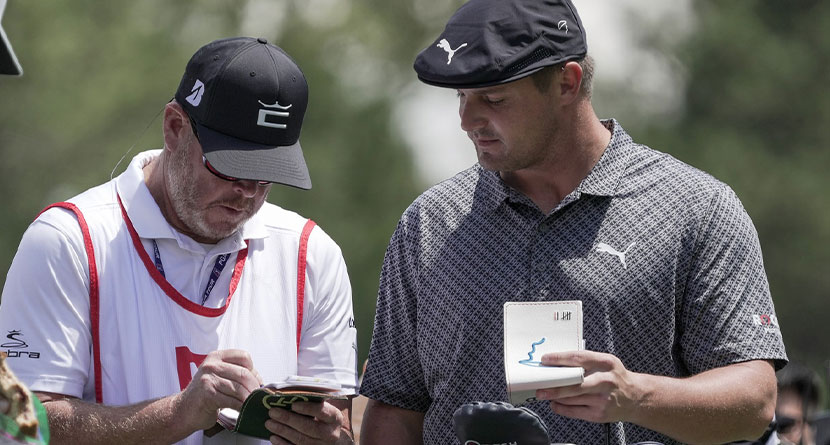 Bryson DeChambeau has been the most interesting man in golf for the better part of the past two years, and the most recent major development came a few weeks ago when DeChambeau and his longtime caddie, Tim Tucker, unceremoniously parted ways on the eve of his title defense at the Rocket Mortgage Classic.

The company line was that the split was mutual, but the prevailing assumption from those who cover the Tour week in and week out was that Tucker simply was at his wit’s end and called it quits.

DeChambeau’s penchant for information has been well-documented, but the sheer amount of data that he ingests on a shot-by-shot basis is somehow even more in-depth than you likely expected.

Tucker joined co-hosts of Golf’s Subpar podcast Colt Knost and Drew Stoltz for an hourlong conversation in which Tucker expressed regret for the ways things ended — “I made a big mistake in my timing with it,” Tucker said — and gave outsiders a peek behind the curtain at what it’s like to work for one of golf’s best — and most demanding — players.

Find out what it’s like to caddie for Bryson DeChambeau and why they parted ways mid-week. You won’t want to miss this one…

“Bryson is very demanding. I think that’s a great attribute from an employer because it makes you get better,” Tucker said. “If you’re not getting better and learning and pushing everything you’re doing, then you become complacent and start making mistakes and you’re not continuing to grow. He makes you do that, and it’s unbelievable. He demands it from everybody.”

Perhaps the most eye-opening portion of an enthralling conversation was Tucker’s explanation of what goes into DeChambeau’s pre-shot routine. In truth, calling it a “pre-shot” routine is doing the work that went into getting their yardage is more like a dissertation.

“Obviously the normal front [yardage], where the pin is, we do air density,” Tucker said. “So, every Monday we get his numbers. So there are no stock numbers for him. If you said, how far do I hit my 7 iron, he’d go, ‘What’s the air density?’ He doesn’t know. I don’t know. So we find that out on Monday. We always use two launch monitors to make sure we have the right swing speed, his stock swing speeds, and then we find out how far it is based on air density.

“So, air density, a lot of people don’t know this. Like here in Amarillo, Texas, I’m in 3,500 feet, and today it was 90 degrees; air density here was 6,800 feet. So if I were making adjustments off 3,500, I would be 7 percent off on my calculation. That’s just one aspect. So we make that adjustment when we get to the ball. I’ll say something like, it’s 175, with air density it’s 185. Then it is, what slope are we going to land into? Two percent slope, OK, green density is 5.8 millimeters. OK? Our spin rate with this club is X and it’s going to release 3 yards.”

Got all that? Neither do we.

To listen to the entire explanation, as well as other fun Bryson stories, check out the full episode down below.