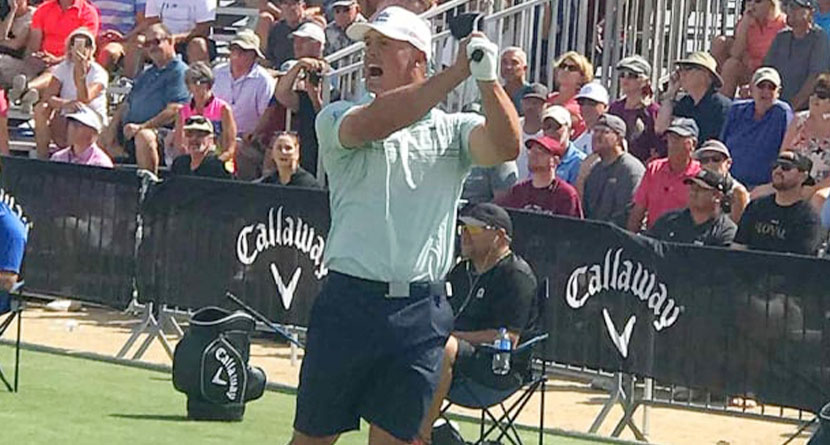 After Bryson DeChambeau completed his opening-round heat at the Professional Long Drivers of America World Championships. on Tuesday, long-drive pro Martin Borgmeier came over to DeChambeau and said, “(I) thought you’d be good, didn’t know you’d be that good.”

That was the general consensus from Mesquite, Nevada: the long-hitting 7th-ranked player in the world, fresh off a 2-0-1 Ryder Cup performance, would be able to hit some decent drives at elevation in the desert, but realistic expectations for DeChambeau were relatively muted.

Then he went out and tied for second his 16-man group, finishing behind Scottie Pearman, the fifth-ranked long-driver in the world, who needed a last-ball bomb to edge DeChambeau and Jim Waldron.

With the top-12 from each group advancing to Wednesday’s round of 64, DeChambeau was comfortably through and is in a position to advance through to Thursday if things go similarly on Day 2.

“I felt like I just won something today, won a big PGA tournament, even though I just qualified for the next day,” DeChambeau said.

Each group competed in five heats, hitting six balls in each hat. Points were earned based on how a player finished in each heat. Winners of each set earned 200 points, second got 100, third 50 and fourth 25 points. Group standings were determined by total points earned.

Sunday: Win the Ryder Cup
Tuesday: 412-yard bombs in a long drive competition@B_DeChambeau‘s having himself some fun. pic.twitter.com/fVnWwvU93s

DeChambeau tallied 100 points in his first two heats, and won his heat in the final three sets to tally 800 total points, just 200 shy of a complete sweep of his group.

The longest hitter on the PGA Tour, DeChambeau launched drives of 412, 408 and 407 yards to win his heats, but he still has work to do if he wants to compete for the world title. His mentor in long-drive, Kyle Berkshire hit 11 drives of 413 yards or more, including a 455-yard bomb that led the field.

Also; the logo is here. 🚀🚀 pic.twitter.com/vufxIj3fkQ

In total, 13 hitters piped longer drives than DeChambeau, including nine who hit multiple farther than the 2020 U.S. Open champion. To put that in perspective, DeChambeau finished 14th out of 80 on Day 1.

A look at the longest drives hit in Round 1.

DeChambeau will be in the fourth and final group on Thursday, which consists of groups of 16 drivers with the top-8 from each group moving on to the Round of 16.

“For me, it would mean a lot (to win), no doubt about it,” DeChambeau said. “Again, I’m looking at it from the standpoint that I’m kind of an underdog, and if I come out and win, that’d be amazing, but for me, this is again just highlighting these players out here; they’re so much faster and they’ve got a lot of talent.”

Impressive debut 🚀💪. @b_dechambeau bombs a 412 yard drive at the 2021 Long Drive Championship to advance into the final 64. #RADSPEED pic.twitter.com/lLQBKjOElZ

DeChambeau’s group will tee it up beginning at 3:45 p.m. PST / 6:45 p.m. EST on Wednesday. The event can be streamed live on the PLDA YouTube page.