DeChambeau To Experiment With 48-Inch Driver 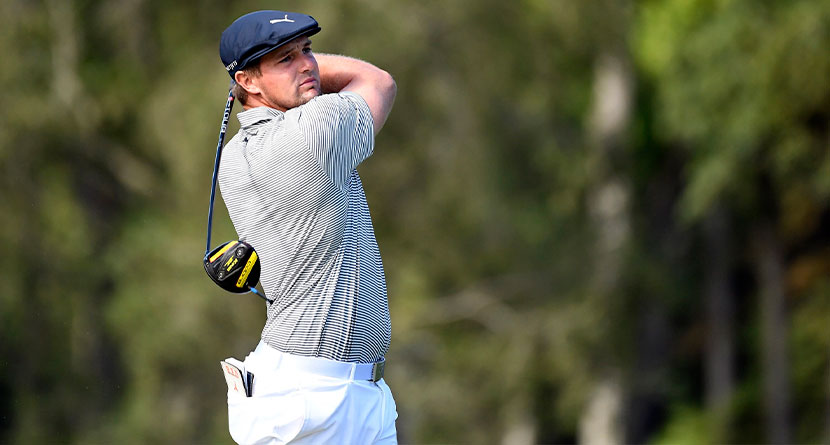 It’s not quite Tiger Woods breaking down and rebuilding his swing after winning the 1997 Masters, or again in 2004 after he had gone on perhaps the greatest run of golf in major championship history, but less than an hour after Bryson DeChambeau raised the U.S. Open Trophy at Winged Foot, he was already talking about what was next.

Nevermind that he had just won by six shots over one of the best fields in golf at one of the game’s most historically difficult venues; DeChambeau’s brain doesn’t work that way. He was already on to Augusta.

“Length is going to be a big advantage there. I know that for a fact,” DeChambeau said. “It’s always an advantage pretty much anywhere, but given that fact, I’m going to try and prepare by testing a couple things with the driver. I mean, by that, it’s 48 inches, and I’ll also do something with the face to account for the new speed that I’m going at.

“I’m not going to stop. Next week I’m going to be trying a 48-inch driver. We’re going to be messing with some head designs and do some amazing with things with Cobra to make it feasible to hit these drives maybe 360, 370, maybe even farther. I don’t know.”

The 48-inch shaft, the limit allowed under the Rules of Golf, is something that DeChambeau got the inspiration for by watching the longest drivers in the world.

“The rules haven’t changed. People have just gotten a little longer with their driver,” DeChambeau said in his post-round press conference. “The shafts have become better for sustaining higher swing speeds, and we’re constantly trying to just hit it as hard as we possibly can.

“Kyle Berkshire, Justin James, a bunch of those (long drive) guys, they all inspired me to try and go harder at it. They are the ones breaking the barriers. I can see what is possible. So that inspires me to keep pushing the limits. I don’t think that science is as big of a role in the market today. I would say it’s more of athleticism playing probably a bigger role for that for sure.

Which brings us to Bryson’s other goal: add another 10-15 pounds between now and November at the Masters.

“They always say, when you work out, you gain your 30 pounds or whatever it is, and then after that, each year, you half it. So you can go 15. If you keep working out every day, you keep halving it. And then eventually there comes a point where you can’t gain much more. But I still feel like I can get up there if you work hard enough.”