DeChambeau Melts Down At Memorial Amid Testy Ruling 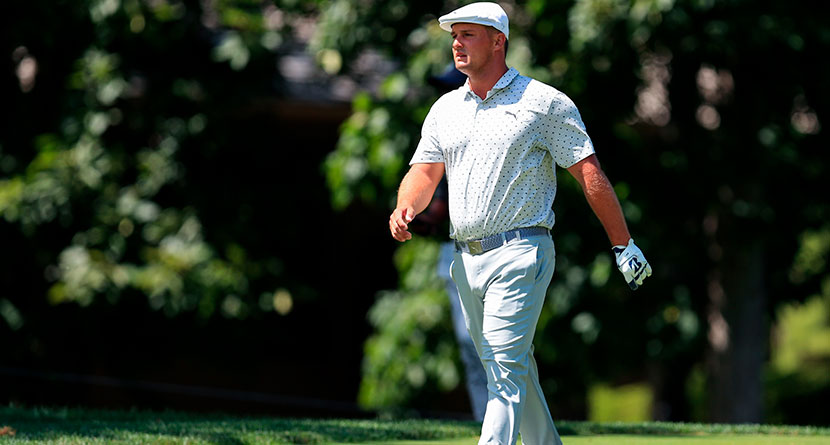 Bryson DeChambeau has spent the better part of the last six months transforming his body so that any shot — no matter the distance — is seemingly doable.

On Friday afternoon at Muirfield Village Golf Club, his bulk was on full display, but discretion would have definitely been the the better part of valor when it came to trying to pull of a very difficult shot on the par-15th hole.

Coming into the hole in 1-over par, DeChambeau pulled his tee shot into the creek that meanders up the left side of the fairway. Taking a drop in the rough some 290 yards from the hole, DeChambeau pulled out a fairway metal and blasted his third shot out of bounds.

He tried the shot two more times with only his third attempt clearly staying in bounds.

When DeChambeau reached the spot where he was to play his eighth shot, he found his second ball very close to the boundary fence, which led to a testy discussion with a rules official about how his ball lied, ultimately pushing DeChambeau to ask for a second opinion before commenting, “They’re giving me a garbage ruling like usual.”

When the second rules official came over, he agreed with his colleague.

“From my perspective, that would be technically still in,” DeChambeau said. “I was wondering if I could hop the fence and hit it?”

DeChambeau received a similar answer, much to his chagrin, meaning he had to play his eighth shot from nearby where he hit his third provisional ball.

DeChambeau needed three shots from right of the green to hole out for a quintuple-bogey 10, which dropped him well outside the 3-over par cutline that he was previously comfortably inside.

Here is the full series of events, compiled by YouTube user GolfRules Questions.

DeChambeau’s 10 did serve a purpose for some others sweating the cutline, chief among them Tiger Woods, as his 10 on No. 15 helped move the cutline from +2 to +3, allowing Woods and others to make the weekend on the number.