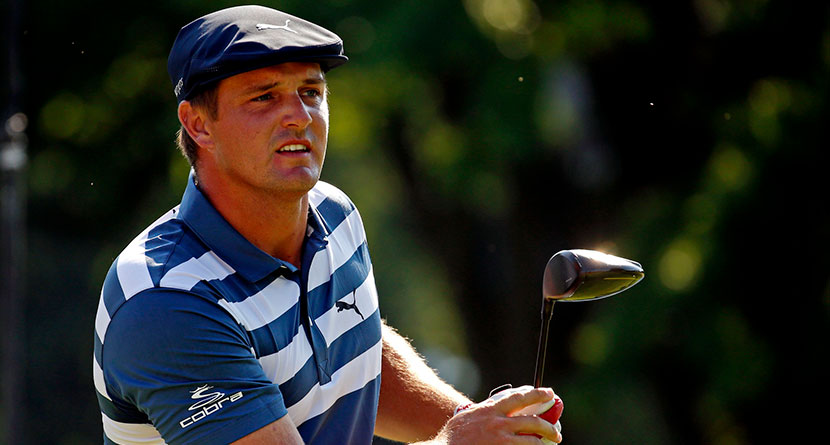 If Bryson DeChambeau weren’t playing so well over the last few months, he could be considered a sideshow, but with eight top-10s in 11 starts this season, including a win, it’s clear what DeChambeau has been doing is working.

Having taken a week off following his breakthrough at the Rocket Mortgage Classic in Detroit two weeks ago, DeChambeau turned up this week at Muirfield Village Golf Club, a course he’s won on before, looking to take some new lines off tees and contend once again on the PGA Tour.

Beginning on the back nine, DeChambeau launched his first three drives over 350 yards, but was only able to card a 1-over par total of 37 on his first nine.

Things changed a bit on the front nine where DeChambeau “unleashed the Kraken” on the opening hole at Muirfield Village, flying his tee shot 345 yards in the air and watching as it ran out to 423 yards, leaving just 45 yards into the lengthy par-4.

423-yard drive. 💪
Hits approach to six feet. 🎯
Makes the putt. 🐦@b_dechambeau gets back to even par.#QuickHits pic.twitter.com/b7DOnHR5oo

DeChambeau was able to convert the birdie on No. 1, but he was unable to get anything going on his second nine, either, posting an even-par nine-hole score of 36 to card a 1-over par 73 that left him seven shots off the lead heading into Friday’s second round.

The craziest part of the first-hole drive was that DeChambeau contends that he didn’t quite catch it.

Even with the less-than-idea contact, DeChambeau took a moment to look back on the journey he’s made in the past few months with No. 1’s 423-yard drive as a perfect encapsulation of just how much he’s changed his game.

“I sometimes can’t believe it,” he said. “There were years where I hit 5-iron into (No. 1), and now I’m hitting a 30-yard little shot. It’s wild. I’m just blessed that I’ve been able to figure some stuff out with the driver. Got a lot more to work on with the wedging and iron play.”