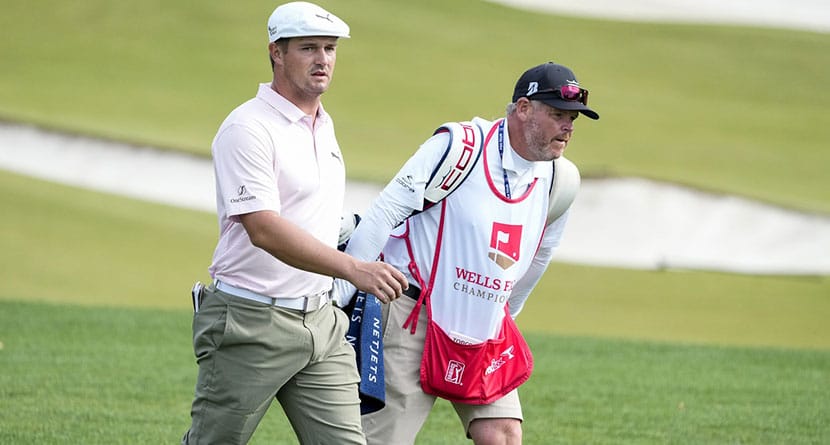 Bryson DeChambeau triple-bogeyed his third-to-last hole of the second round at the Wells Fargo Championship, and despite a bounce-back birdie on his 17th hole and a par on his final hole of the day, he and his team thought there was no way he would play the weekend.

Hovering around 90th on the leaderboard, frustrated with the way things ended and figuring there was no way — even with winds picking up around Quail Hollow — that the cut would move to 2-over par, DeChambeau and his team boarded a private plane and headed southwest towards Dallas.

“I made triple on 7 and then chipped in on 8 for birdie. I thought I had to make birdie on the last and I didn’t, missed the putt, and I was like, ‘there’s no way I’m making it, it’s 90th place,‘ so we just said, ‘all right, let’s pack up, let’s go.’ Want to get ready for next week and going home.

Over 1,000 miles away in Texas around 6 p.m. on Friday and facing a tee time back in Charlotte early Saturday morning, DeChambeau and his team had a decision to make. Unable to turn the plane around due to the flight crew’s hours restrictions, they opted to fly out at at 2:45 a.m. Saturday morning.

Bryson DeChambeau shot 74 this morning at the Wells Fargo and thought he missed the cut, so he flew back to Dallas…

…and now he has an 8:10 a.m. tee time in Charlotte to get back to pic.twitter.com/hfMCWPwZTE

“We did a lot of scrambling last night to get back,” DeChambeau said after a 3-under par 68 on Saturday. “One of the scenarios was like turning right back around, but the crew couldn’t refuel and their hours were out. So we had to get a new crew, if anything, and it just didn’t work out. So we’re like, ‘Well, let’s just go in the morning.’

DeChambeau estimated that his round trip was roughly six hours, which using a ballpark estimate likely cost around $30,000. His third-round 68, followed up by another 68 on Sunday moved the reigning U.S. Open Champion from the cutline into the top-10.

His T9 finish bagged DeChambeau $228,825, so even though the mistake was costly, he did more than make up for it.

“It’s very expensive; way too expensive, but the thing is, I had a chance to go make a good check this week and I think that would offset it,” he said. “So if I was to not come back and withdraw, lose world ranking points and all that, I had to incur the cost. It’s my fault. I said there’s no way I can do that. I can’t let down Wells Fargo, I can’t let down Quail Hollow.

“It was worth it. It no doubt was worth it. That’s what I was hoping to do this weekend when I was on that plane at 2:45 a.m. Yeah, I wanted to make it worth it. I didn’t want to come out here and finish 60-whatever, close to last. Even at that, it’s still FedExC up points, it’s still world ranking points. I was pleased to have come back and finished inside the top-10 and be there and keep moving up the world rankings.”

All in all, DeChambeau chalked it up to a learning experience.

“I learned my lesson, for sure,” he said.