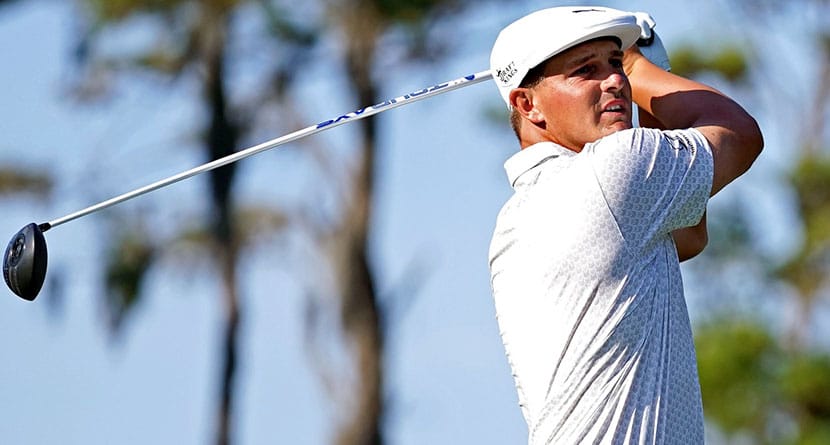 The build-up to Bryson DeChambeau’s expected dismantling of Augusta National Golf Club at the 2020 Masters fell flat on its face as the reigning U.S. Open champion barely made the cut en route to a largely forgettable T34 finish.

Just five months later, there isn’t talk about a 48-inch driver or the course playing as a par-67 for the long-hitting DeChambeau, but there is a new secret weapon that is expected to be in Bryson’s bag that he hopes could be a gamechanger.

Speaking to Golf.com’s Jonathan Wall ahead of the tournament, DeChambeau said he’s planning to use a custom-made Cobra RadSpeed driver that has been three years in the making.

“It’s just a different shape, for the most part, and the face is something I’ve been talking about for a long time — how we’re designing the face for the speeds I’m producing and the shot shapes I want,” DeChambeau said.

Details on the @cobragolf RadSpeed prototype driver Bryson DeChambeau is considering putting in play at the Masters. https://t.co/xK4sTuDi85

Conveniently, a new version of Cobra’s RadSpeed driver appeared on the USGA list of conforming driver heads on Monday with only one loft listing: 5.5°, meaning it was made specifically for Dechambeau.

“Hitting a 5-degree driver at 200 miles per hour ball speed presents some very different ball/club dynamics than our engineering team is typically designing for,” Cobra Tour rep Ben Schomin told Wall. “We’ve had to rethink our approach in some aspects of design/testing and continue to do so. This head is our latest iteration to find something that works best for Bryson at these tremendously high speeds.”

In simple layman’s terms, the new driver face used in this version of the RadSpeed should help mitigate mishits for someone generating 200MPH-plus ball speeds.

We are all Vijay Singh watching Bryson DeChambeau on the practice range. pic.twitter.com/PXkM3ks4NO

As Wall explained it, Cobra engineers made significant modifications to the face, replacing the Infinity Face design found in retail drivers with a thicker version for added durability. The toe of the face was also made flatter to reduce gear effect to tighten DeChambeau’s dispersion.

While the DeChambeau and the Cobra reps were forthcoming with Wall, mum was the word on Tuesday in the press center.

“Obviously there’s something in the bag this week that’s very helpful,” he said Tuesday. “I won’t go into specifics of it. But just know this has been a few years in the making, and I’m very excited for it. Whether it helps me perform at a higher level, I’m not sure, because it’s golf and you never know what happens.

The 48-inch driver never made it into the bag before last year’s event, but it sounds as if there will be a new driver this time around. Whether it will make enough of a difference to get DeChambeau into his first green jacket remains to be seen.