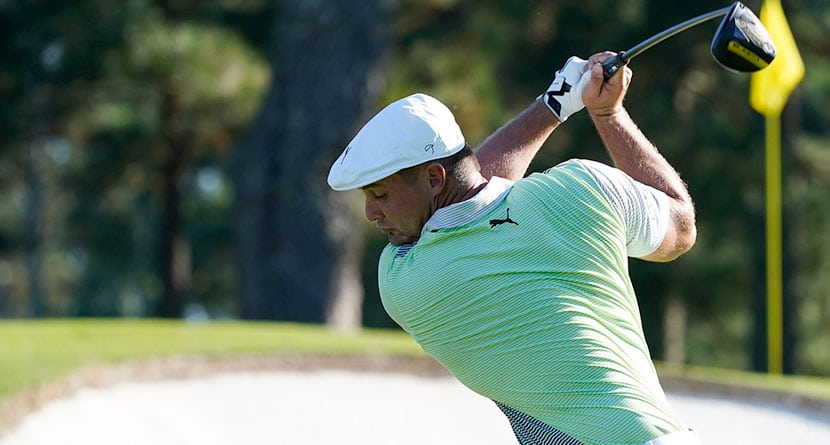 The Bryson DeChambeau bulk-up may have lost some momentum as the reigning U.S. Open winner has begun to lean out and concentrate more on his gut health while continuing to chase speed in order to make 200-plus ballspeeds his norm on the PGA Tour.

A number of videos have popped up on social media of DeChambeau since November’s Masters working in instructor Chris Como’s Dallas-based fantasy factory alongside World Long Drive champion Kyle Berkshire. That’s a round-about way of saying the goal — distance — remains the same even if the means by which he is attempting to accomplish are slightly being altered.

After hinting at some issues around the Masters, DeChambeau has undergone tests ad nauseam to assess what’s working for him and what isn’t.

Was his all-time high, says it was almost 25 mph more than what he was doing at Winged Foot 😬

“The one thing I will tell you is that I’ve done a lot of brain training with Neuropeak, and the frontal lobe of my brain was working really, really hard and that’s kind of what gave me some weird symptoms, like crazy overworking,” DeChambeau said recently. “So as I started to relax my brain a little bit and just get into a more comfortable situation and got on a really good sleep schedule routine, a lot of those symptoms went away and they come back every once in a while but as I do a lot of breathing, it goes away and that’s really what I’m focused on trying to do.”

“I’m really working with Chris Como on it with this new game and new approach. I would say I’m focusing on my health in regards to my body, more importantly, because if my body feels good, my mental game is going to be good.”

What does that mean for 2021? It would appear as if the sky is the limit, according to a recent interview with Golf.com, and driving at least one par-5 on the PGA Tour appears to be in the cards.

Bryson hasn’t committed to playing Bay Hill yet, but if he does, he already know he’s going to try driving the 6th green 😍https://t.co/t3Xw3a82GZ pic.twitter.com/SWe2GBdCvF

The par-5 6th hole at Arnold Palmer’s Bay Hill Club & Lodge stretches out to 590 yards, doglegging hard from right-to-left around a lake that protects the entire left side of the hole. However, DeChambeau is simply seeing that lake as protecting the front of the green at a 340-yard carry.

“If I play (API) this year I will definitely do it,” DeChambeau told Golf.com’s Sean Zak last week. “Number six at Bay Hill is one of those I’ve been eyeing. I think I can do some pretty cool things on it.”

The hole plays predominantly downwind, so assuming normal conditions and a made cut, DeChambeau should have ample opportunity to bomb a drive up near the green. He won’t be the first to try it in competition, though. John Daly tried it a few times during the same round at Bay Hill in 1998.

DeChambeau will get his 2021 season underway next week at the Saudi International before returning stateside for the run-up to the Masters in April. The API will take place March 4-7.