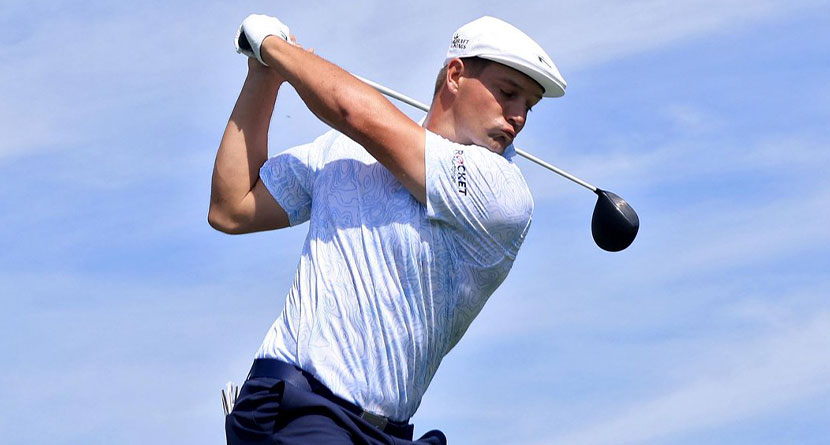 The Americans’ Ryder Cup triumph allowed Bryson DeChambeau to ride a wave of goodwill into his competitive long-drive debut, his fraught relationship with golf fans temporarily thawed by a 2-0-1 performance at Whistling Straits that was without a whiff of “Brooksy” drama.

But if there were any questions about whether a visit to Mesquite, Nevada for the Professional Long Drivers Association World Championship was just another stunt to satisfy DeChambeau’s considerable social media appetite, the Colossus of Cringe seems to have silenced the doubters. For now.

Indeed, DeChambeau’s approval rating continued its upward trend in the desert, where he outlasted 73 other competitors to finish seventh in the annual showcase of golf’s most primal element.

All in all, the 28-year-old did himself and his Tour proud, bashing nine drives of 400 yards or longer and topping out at 412 yards with a first-round bomb that ignited the crowd. After narrowly earning passage into the quarterfinals with a 394-yard drive in the Round of 16, DeChambeau’s quest stalled in the presence of close friend and eventual champion Kyle Berkshire.

But moreover, DeChambeau — whose 2021 PGA Tour season was marred by controversy of both the on- and off-course variety — seemed genuinely at ease participating in an event that celebrates spectacle rather than downplaying it, according to Golf.com’s James Colgan.

“I’m definitely going to continue to keep doing this, and I think these guys that are bigger, better, faster, stronger than me are going to keep pushing me to go faster,” DeChambeau told reporters — a notable development given his recent stance on media obligations. “And I think this is going to translate over really, really well to the PGA Tour.”

Similar crossover experiments have been met with skepticism, but DeChambeau benefitted from having the backing of Berkshire, who was defending his 2019 crown (the event was not contested in 2020 due to the COVID-19 pandemic).

“I think it’s very safe to say, you could almost call him a savior of the sport, honestly, because I think it’s safe to say we wouldn’t have had nearly the attention on this if he hadn’t decided to come compete,” Berkshire said. “I think it’s a testament to Bryson and how special of an athlete he is to go from a Ryder Cup, and doing well, dominating, to getting extremely far and becoming a final-eight contestant at his first world championship. To put that in perspective, that would be like me finishing top 10 on a PGA Tour event my first try.

“I mean, it’s unbelievable what he did. It’s almost unfathomable.”

That DeChambeau has now sailed through two global events without incident should not be brushed aside. When you consider the antagonistic nature of his recent brushes with galleries — culminating in an ugly exchange with a fan at the conclusion of the BMW Championship — it was fair to wonder if his inclusion on the American side would help the Euros retain the Cup.

Instead, DeChambeau heads into the off-season with a chance to rehabilitate his reputation even further. Ahead of the Ryder Cup matches he stoked interest in a long-rumored money match against primary rival Brooks Koepka when he hinted at “something fun” brewing between them. But at the very least, they seem to have struck an uneasy truce.

You can also expect to see DeChambeau tee it up in another long-drive competition.

“I am definitely hungry to come back,” DeChambeau said. “I hope it fits in the schedule and we can work it out with the Tour to make sure it works right.”