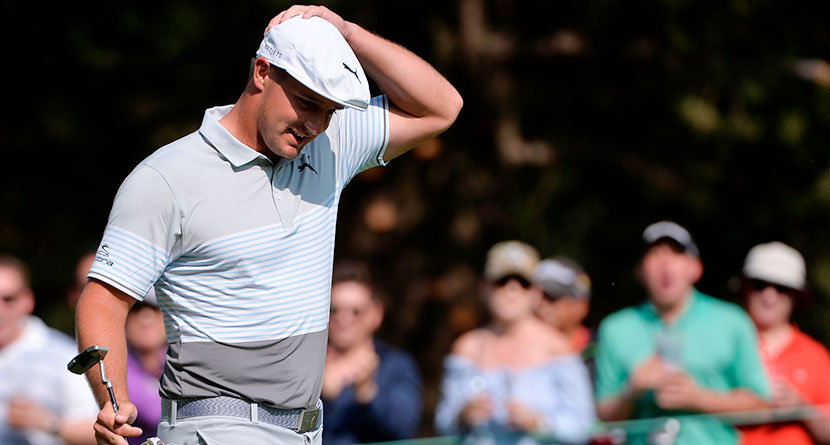 Wherever Bryson DeChambeau goes, controversy and drama seem to follow.

Since bursting onto the scene in 2015 at the NCAA Championship and U.S. Amateur, DeChambeau’s outside-the-box approach to the game has rubbed a certain segment of golf purists the wrong way.

A natural “villain” of sorts — in the sense that he doesn’t fit into the mold of the conventional Tour pro — DeChambeau’s career has been looked upon with a skeptical eye, whether it be his equipment, his analytical approach or his occasional hot temper.


Perhaps the scene of one of his most infamous outbursts, Club de Golf Chapultepec, host of this past week’s WGC-Mexico Championship, again played a role in an internet-scolding from both fans and peers.

Last year at the event, DeChambeau was caught on SkySports cameras tomahawking his putter into the practice green surface during a post-round putting session. The 26-year-old was rightly lambasted for actions, and given his history with emotional outbursts, it appears he no longer is given the benefit of the doubt in similar situations.

During this year’s third round at the same event, DeChambeau missed a four-footer for par on the 14th green, his second of three closing birdies over the final six holes and his frustrations with the greens surfaces bubbled over once again.

DeChambeau aggressively and repeatedly thumped his putter against the surface in an animated attempt to pat down a ball mark or other imperfection some 10 times.

The video of the incident was instantly clipped and posted to social media where a mini firestorm took off. DeChambeau was roundly criticized for his antics, labeled as childish and disrespectful for the men and women who work to make the course playable on a daily basis.

The biggest name to cast aspersions was fellow Tour pro and WGC-Mexico competitor Lee Westwood who opted to take a light-hearted approach to the video by invoking a rules-based approach.

You can actually tap stuff down legally before you putt now. https://t.co/TXXwtKwgL1

“You can actually tap stuff down legally before you putt now,” Westwood said, referring to last year’s rule change.

DeChambeau would go on to finish runner-up to eventual champion, Patrick Reed. It was DeChambeau’s best finish on Tour since a T4 at the Shriners Hospitals for Children Open in October.