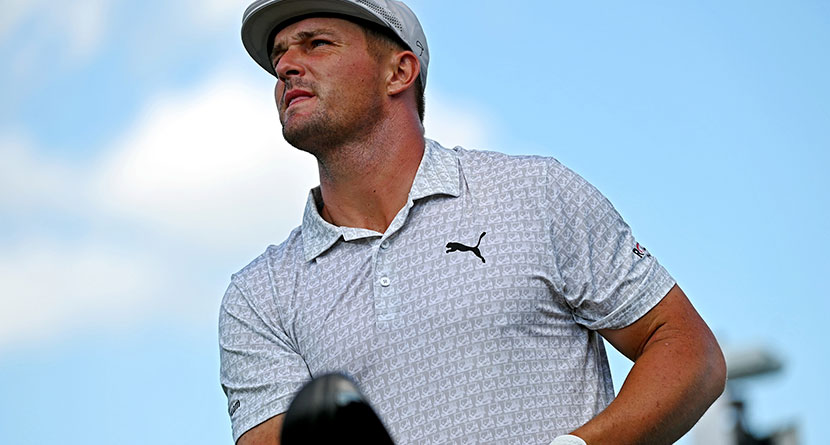 With Ryer Cup week upon us, players from the United States and Europe have attempted to prepare for the biennial matches in a fashion that wouldn’t be too dissimilar from a major championship.

Jon Rahm, for instance, teed it up in California at the Fortinet Championship on the PGA Tour, just like he did ahead of three of the four major championships this year (the U.S. Open being the exception as he was sidelined with Covid).

The United States team made a scouting trip last weekend, much in the vein of how players visit major championship venues a few weeks in advance to do some scouting and get their preparations in order. And while Bryson DeChambeau was along for the scouting trip, his Ryder Cup prep has also included some unconventional prep work.

How unconventional? In order to find DeChambeau over the past few weeks, you would have to travel to a place called “Bobby Peterson’s One Stop Power Shop” in Newton Grove, N.C.

That’s where DeChambeau has been going through his version of training camp — two-a-day 90-plus-minute speed training sessions — in the build-up for one of his biggest events of the season — the Professional Long Drivers Association World Championships in Mesquite, Nevada the week following the matches.

Thanks to these sessions, DeChambeau has some battle scars that he’ll be carrying to Whistling Straits this week.

“My hands are wrecked from (the training),” DeChambeau told Jonathan Wall of Golf.com. “People don’t realize how difficult long drive really is. In golf, it’s the one thing where you can judge your accomplishments by a number. Not necessarily by going out and playing golf, because you can catch a sprinkler head or catch a bad break or bad wind.

“On Flightscope, you can see the ball speed number. And when you obtain a ball speed number, it’s so different and unique. It’s like a shot-putter shot-putting a new record number. You’re trying to find that full potential to breakthrough.”

While the ramp-up of speed for the long drive competition has seen DeChambeau attempt to reach ball and club head speed numbers he hasn’t yet sniffed in PGA Tour competition, the 2019 U.S. Open winner shrugs off concerns that it will impact his play at the Ryder Cup and beyond.

“I do it every week,” he said. “Is it daunting? Hell yeah. At first, when I was trying to do it last year, it was very scary. But now that I’ve been through it and experienced the worst pains from it, and the most relaxed state of it where I’m not doing any speed training, I know how to kind of balance it — for the most part.

“Why not go hard at life and do both?”

The first green at Whistling Straits is roughly 340 yards away from the first tee. If nothing else, when DeChambeau inevitably tees it up there, it will be something to keep an eye on.