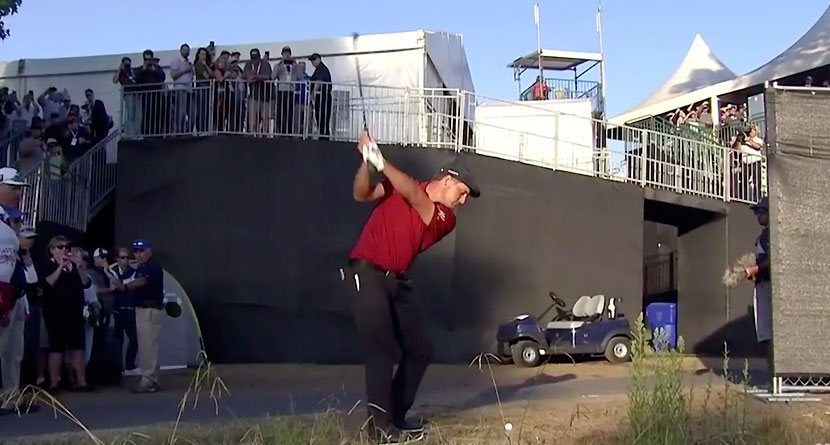 Bryson DeChambeau entered the third round of the Safeway Open with a two-shot lead and his game seemingly in complete control.

However, his Saturday round went about as sideways as it can for a pro who played the first two rounds of a tournament in 12-under par, and it was capped off by a bizarre rules inquisition that left DeChambeau hitting his third shot into the par-5 18th hole at Silverado Resort and Spa from behind a grandstand.

DeChambeau made his first bogey of the tournament on the par-4 third hole, and was unable to recoup it over the next six as he posted a 1-over par-37 on the front nine. Still well within contention, the five-time PGA Tour winner dropped three more shots over the next four holes to sit at 8-under par for the tournament.

Without a birdie on his card for the round, DeChambeau came to the closing par-5 that has a green surrounded by grandstands in an attempt to create an arena-like setting. Having only 253 yards into the green after a 332-yard drive, DeChambeau opted to hit a fairway wood knowing he had a backstop of sorts surrounding the green.

The No. 11-ranked player in the world nuked the fairway wood to the roof of the grandstand and over it into a penalty area.

As PGA Tour vice president of rules and competitions Mark Russell explained, DeChambeau was entitled to “maximum relief” from the grandstands — deemed temporary immovable obstructions — inside the penalty area. Because his ball had come to rest within the penalty area, he could get as much relief within that area as possible, but not complete relief without taking a stroke penalty and leaving the hazard.

“He could not take the ball freely outside of the hazard. He would have to take a penalty stroke to do that, but he got maximum relief from the TIOs in the hazard,” Russell said. “He only gets maximum relief. Not complete relief, maximum relief. So that’s what he did.”

As a result, DeChambeau found a spot within the penalty area to take his drop and he played an incredible shot up and over the grandstand to inside 10 feet for birdie. The entire ordeal took more than 15 minutes.

The closing par left DeChambeau to sign for a 4-over par 76 and dropped him to six shots behind 54-hole leader Cameron Champ. Champ will begin the final round with a three-shot lead over last week’s winner, Sebastian Munoz, as well as Canadians Nick Taylor and Adam Hadwin.