Why Bryson Could Repair His Driver After Snapping It 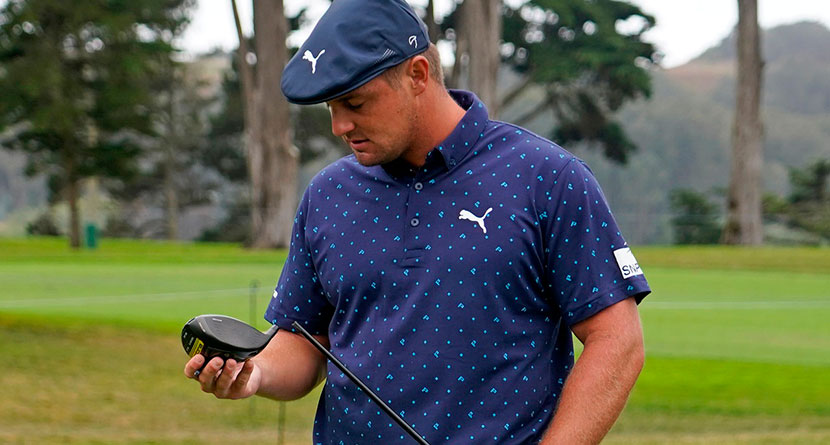 Bryson DeChambeau had another run-in with a rules official during the first round of the PGA Championship at Harding Park on Thursday, but there wasn’t any of the contentiousness we’ve seen in recent weeks.

Instead, the rules official was called in by DeChambeau’s caddie following the World No. 7 teed off on the short par-4 7th hole.

After DeChambeau unleashed a swing that is still jarring despite its regularity, he followed the ball closely as it drifted right of the fairway. Satisfied with where it came to rest, DeChambeau went to pick up his tee, putting some weight on the driver as he used to for balance only to get a jolt as the driver head snapped off the end of the club.

Oops! Bryson DeChambeau broke his driver in Round 1 when leaning on it to pick up his tee after his tee shot. pic.twitter.com/XUHmTxOrHo

After the round, DeChambeau intimated that he believes the club broke prior to him leaning on it to pick up his tee.

“Definitely the ball did not react properly,” DeChambeau said after the round. “I hit it out to the right, felt like I drew it and the ball went to the right and spun up like crazy. I’m like, ‘that’s not normal.’

“So it was surprising, and then I just went over to pick up my tee, leaned on it a little, and the thing just, see ya later. Scott and Rickie said, ‘that did not sound normal,’ and so I was fortunate to get some help on that and be able to switch out shafts and played decent coming in.”

The look on Rickie’s face here. Deserves an espy https://t.co/LCuB0FVbCH

Under Rule 4.1a, the manner in which the club was broken allowed it to be replaced by a back-up club DeChambeau had on the property. Here’s how the rule reads:

Use or Repair of Club Damaged During Round. If a conforming club is damaged during a round or while play is stopped under Rule 5.7a, the player normally must not replace it with another club. For the rest of the round, the player may have the club repaired by restoring it as nearly as possible to its condition before the damage happened during the round or while play was stopped, while still using the original grip, shaft and clubhead.

“Damaged during a round ” means when the club’s performance characteristics are changed because of any act during the round whether by the player (such as making a stroke or practice swing with the club, putting it in or taking it out of a golf bag, dropping or leaning on it, or throwing or abusing it), or by any other person, outside influence or natural forces.

DeChambeau had a member of his team retrieve one of three back-up shafts he travels with and he was able to repair his club back to its original setting before snapping it on 7 tee.

“At some point, material is material,” DeChambeau said. “You keep wearing it and using it like that, you know, stuff is going to break down. I’m just glad it lasted this long. That’s a testament to how good their product actually is, and being able to switch it out and put a new one right back in play in a major championship and stripe one on 9, that’s pretty impressive. That shows how good their product is.”

He managed to par the 7th and 8th holes and with a new shaft in his driver, he unleashed a 327-yard drive down the fairway on the par-4 9th hole en route to a birdie on the toughest hole of the day.

DeChambeau reached as low as 4-under par on his round on multiple occasions, but three bogeys sprinkled throughout his back nine left him at 2-under par, three shots back of first-round leader Jason Day, in a tie for 20th.