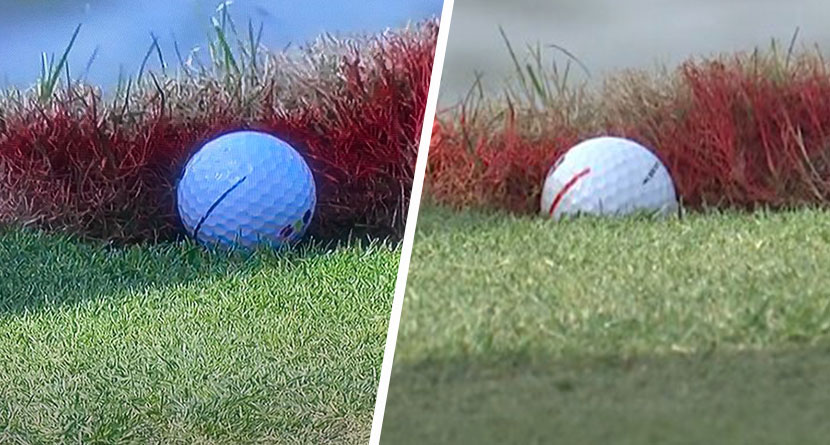 If you’re a skeptic of the enforcement of the Rules of Golf — and many people are — what took place during the first round-robin matches at the WGC-Dell Technologies Match Play Championship won’t do much to change your stance.

Roughly two hours apart, Bryson DeChambeau and Thomas Pieters hit their balls into virtually the same spot on the drivable par-4 13th hole and received two completely different rulings, the former advantageous that resulted in a hole being halved and the latter penalizing, which thankfully did not determine the outcome of the match.

In a Group 12 match between Pieters and Tom Hoge, the big-hitting Belgian’s second shot found a sprinkler head just off the green near the penalty area that fronts the putting surface. Pieters’ ball nestled up to the water-side of the sprinkler because… gravity.

Here’s the catch: The ball came to rest up against grass that had been painted red to denote the penalty area. An official was called in and enforced the letter of the rule: a player does not get relief because a ball touching a hazard line is deemed to be in the hazard.

Pieters, 3-up at the time, was understandably miffed. And when Hoge drained a 20-foot birdie putt from off the fringe, Pieters practically conceded the hole, slapping at his ball before tossing it into Lake Austin. Pieters would go to win his match 2-up.

Fast-forward two hours and DeChambeau found his ball in the exact same sprinkler head resting up against the same red-painted grass.

On the left: no relief
On the right: free relief

Someone will have to explain to me! pic.twitter.com/9B8rON7IFx

However, rules officials had come together to change their interpretation of the situation to give credence to the spirit of the rule and acknowledge they had made a mistake. As a result, DeChambeau was given relief and was able to save par, tying the hole, and eventually, the match.

Why the ruling changed

PGA Tour Chief Referee Gary Young explained that the competition committee made a mistake in allowing that line to directly abut the sprinkler head, and due to the nature of the match play format, they were able to make an instant adjustment as “protecting the field” is only relevant to the match at hand.

“They said you can’t get relief. I was like, what are you talking about, it’s in the sprinkler head and outside of the hazard,” DeChambeau said. “I had a rules official come up and he clarified it to me, that Thomas didn’t get relief, but we changed it because it just wasn’t right, and apparently they can do that in match play.”

Imagine moving the sideline during the middle of an NFL game. pic.twitter.com/2OpYkUasqK

There was some faux-outrage because there always is, and while Pieters received the raw end of the deal, it did not prevent him from winning his match. It did, however, impact DeChambeau’s match and most of all, his competitor Richard Bland who had to settle for a half-point vs. a full one.

To his credit, Bland was able to see the other side of things while injecting some humor as well.

“They said, ‘Look, we gave him the wrong ruling’ and that’s tough for Thomas,” Bland said. “I know it could have been a pivotal part of the match around that corner, but I think if the shoe is on the other foot and I wasn’t getting a drop I think I’d be throwing the ref in the water.”