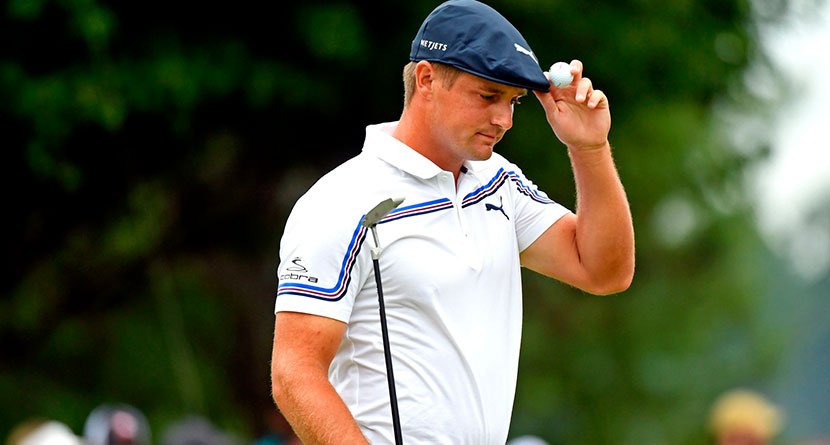 As Bob Dylan famously sang, “times, they are a-changin’,” and you need look no further for proof than the way we’ve found out some interesting tidbits about one of golf’s most fascinating players in recent days.

Bryson DeChambeau has been an interesting case study for golf fans since he burst onto the scene while playing amateur golf and collegiately at Southern Methodist University. While it was mostly his unique single-length irons that initially drew interest, we’ve come to find out there’s much more to him than just the clubs he uses.

Now, DeChambeau may be revolutionizing the way at least some segment of the golf population gets to know him better: by live-streaming video games on Twitch and answering questions in his downtime.


Over the past four days alone, DeChambeau has logged more than 14 hours streaming himself playing the popular game “Fortnite” while fielding questions from fans that has become one of the most accessible and candid ways to interact with a top-15 player in the world.

Link to Bryson’s Twitch for those not nerdy enough to know his twitch handle already: https://t.co/QdeBRhY3vh https://t.co/XFo2bwa44D

Brought to the greater golf consciousness by Golf.com’s Luke Kerr-Dineen, DeChambeau riffs while he plays about everything from his golf game to world politics, including how the escalating situation in the Middle East could affect his schedule plans.

Speaking about his golf, DeChambeau is self-deprecating while also insightful. He’s not afraid to admit that he didn’t have his best year on Tour in 2019…

Link to Bryson’s Twitch for those not nerdy enough to know his twitch handle already: https://t.co/QdeBRhY3vh https://t.co/XFo2bwa44D

… and he shined a light on his recent gym work that has him expecting to hit the ball “350-400 yards” off the tee, which has made his wedge work a priority over the offseason.

Straying away from golf, he spoke last night about the situation in the Middle East and how it could impact his upcoming schedule where he’s supposed to play in Abu Dhabi next week and in Saudi Arabia at the end of the month.

Alright all you Twitch haters, here’s a nugget Bryson just dropped during the stream:

Says he’s “really not sure” if he’s going to go to Abu Dhabi next week because of recent events in the region. “No American is safe.”

Each night is it’s own adventure while DeChambeau goes over his practice regiment for the day as well as any other myriad of topics. Thankfully, the guys at Outside the Cut put together a highlight package of a recent Bryson stream to give you an idea of what you’re getting yourself into if you decide to tune in.

Creating this content perfectly illustrates what OTC was built to do. H/T @LukeKerrDineen for the tip. pic.twitter.com/LbW8fOjolb