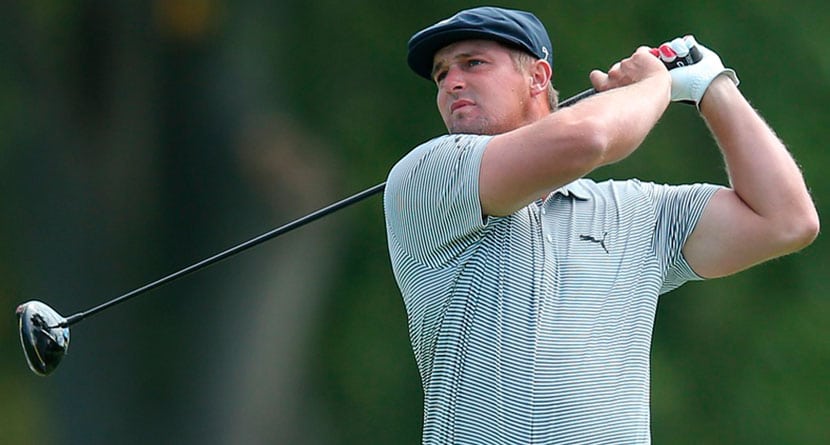 Bryson DeChambeau has something extra special planned for the final major championship of the year, the Masters, in a month, but that hasn’t stopped him from picking up where he left off last month at the U.S. Open in Las Vegas.

An opening-round 9-under par 62 aided by +2.093 strokes gained: off the tee, but DeChambeau hinted all week in Vegas that despite how well he’s been driving it, he’s planning to take it up a notch at Augusta National.

“I’m looking forward to trying to put in a 48-inch driver and see what that can do for the golf course and what opportunities it will present me,” DeChambeau said at TPC Summerlin. “It’s going well. I think there is a lot of, I guess you would say, advantages to having a 48-inch driver and being able to put it in play and keep it in play. So working on that. Still need to get some things worked out, but so far, it’s been pretty amazing.

“It’ll look like a missile coming off the face. It’ll be going pretty fast.”

DeChambeau led the PGA Tour in distance off the tee last year at 322.1, but he said he’s even been surprised by how far the ball is going after adding 2.5 inches to his driver.

“There are speed improvements, speed gains, and it’s exciting,” he said. “It really is something crazy that I never thought was even possible. The numbers that it’s producing are staggering, way more than what I’m doing right now. So if I can get it dialed in and get the miss-hits working correctly, I feel like I can easily but that in play at Augusta. It’s a golf course I can definitely put that in play.”

He was relatively secretive about specifics, making sure that there won’t be anything that will negatively impact his preparations.

“I will not disclose (how far it goes) right now,” he said. “I don’t want to ruffle any feathers.”

And finally, where did his inspiration for even more distance come from? Happy Gilmore, naturally.

“I watched Happy Gilmore a little while ago and just re-inspired me to try and hit it as far as possible,” he said.