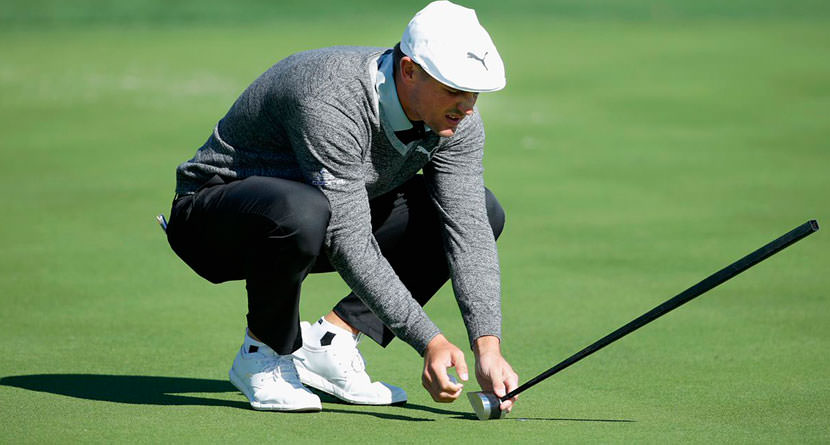 Bryson DeChambeau has never been scared to forge his own path, but his most recent eccentricity has been deemed illegal — at least in terms of the equipment he has been using — by the United States Golf Association.

DeChambeau has employed a side-saddle putting style this year, which he believes is the best way to make the most putts, because he can see his line and feels it’s a more natural and efficient motion to get the ball on line. To incorporate this front-facing putting style, DeChambeau has created his own putter to best suit his new stroke, but the only problem was the USGA told him if he put it in play, he’d be disqualified.

Adam Schupack of the Morning Read has the details.

Shortly after noon on the eve of last week’s CareerBuilder Challenge in LaQuinta, Calif., DeChambeau was practicing on the putting green when he received a call from a PGA Tour official informing him that the center-shafted putter which he intended to use in the tournament was deemed non-conforming to the Rules of Golf.

“I was very disappointed with the way they handled it,” DeChambeau said Tuesday at PGA Demo Day at Orange County National. “They’ve said to me, too, that they don’t like the way I’m doing it. But it’s within the rules, and I don’t know why they don’t like it. They say I’m potentially taking skill out of the game. Anything that helps shoot lower scores or makes golf more fun and grows the game, that’s what I’m all about.”

DeChambeau, who won the 2015 NCAA championship and the 2016 Dap Championship on the Web.com Tour, submitted several putters for USGA approval, and only one was deemed non-conforming. The USGA would not comment on why the club failed to pass inspection.

“The circumstances surrounding the club’s non-conformance are confidential and between the USGA and Bryson DeChambeau,” said USGA spokeswoman Janeen Driscoll, noting such policy was in compliance with its agreement with manufacturers and those who have submitted clubs for approval. Driscoll would confirm only that the putter which DeChambeau used last week in competition was conforming.

DeChambeau, 23, was able to use the putter head but with the shaft in the rear instead of the center of the club.

“They basically threatened him that if he showed up on Thursday, they would DQ him,” said Mike Schy, DeChambeau’s longtime instructor. “I think they thought he wouldn’t have a backup and he’d have to go back to conventional and it would be over.

“The week before, they made him put lead tape and mark it up,” Schy said. “Every week, they’ve been inspecting it. It’s bad. It’s really bad. I’m telling you, they do not want him putting this way. For some reason, they think it is an enormous advantage, and it is not.”