Bryson Staying In Lawsuit Out Of Principle, PIP Money 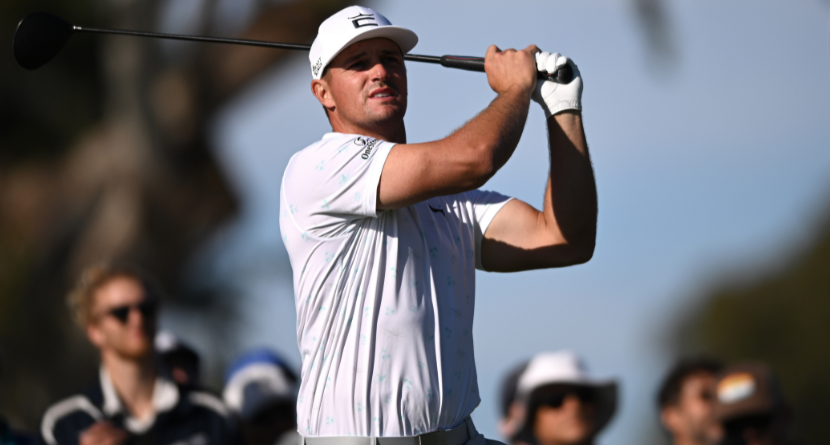 Ever since the PGA Tour announced its Player Impact Program (PIP) in 2021, it’s been a lightning rod of sorts.

In an honest attempt to gain more traction for the game by rewarding its most buzzworthy stars for bringing positive attention to the game, it wound up having a cascade effect throughout the professional golf realm.

There was $40 million allocated to be dispersed amongst the top ten most attention-generating PGA Tour players based on five criteria used to form the PIP rankings. To some, it seemed like a departure from the “earning” aspect of the PGA Tour and an arrival at more guaranteed dollars for golf’s biggest names simply for generating clicks and views.

For example, despite not playing in most of 2021, Tiger Woods was top overall on the PIP list and was awarded $8 million.

One of the more noticeable faces on Tour, for better or worse, Bryson DeChambeau was awarded $3.5 million for 5th place in the PIP rankings for 2021.

Certainly, not all press involving Bryson was considered positive for the PGA Tour. Whether or not it was by design, Bryson manipulated the PIP to get ample attention, just sometimes not the way the PGA Tour intended.

His “rivalry” with Brooks Koepka was just the type of petty drama that generates clicks in a less savory manner nowadays, and he leaned into that. He’s been caught on microphones criticizing course conditions. His generated content, while plentiful, simply wasn’t always a great look for the Tour.

Now, as a current LIV Golf competitor, Bryson is standing firm with his new circuit’s antitrust lawsuit against the PGA Tour.

The original complaint from late August accuses the PGA Tour of monopolization and suppression of the new Saudi-backed golf league. Meanwhile, the petty war rages on and the PGA Tour has recently countersued for tampering and recruiting current Tour players to LIV.

With the primary message sent, there have been several big names removing themself from the lawsuit, such as Phil Mickelson, but Bryson has other plans.

At last week’s LIV event in Miami, he said the PGA Tour still owes him the second half of his $3.5 million PIP reward, and he plans to remain a plaintiff in the case.

There were reportedly two requirements that needed to be completed to receive the second portion, and he came up short despite his best efforts. He played in the Valero Texas Open to check off the first box since he hadn’t played that event in the previous 4 years.

However, after defecting to LIV he wasn’t allowed to fulfill his last remaining duty of appearing at a charity event since he was no longer a PGA Tour member in good standing.

He openly lamented on the topic, saying, “It’s really been frustrating over the last six years that I’ve had to deal with [the PGA Tour. It’s consistently frustration after frustration of them not handling things correctly.”

Bryson maintains that his continued inclusion in the lawsuit not about the money — he is reported to have signed a contract with LIV Golf worth around $125 million — but instead “about the principle.”

Bryson isn’t the only former PGA Tour player with qualms regarding the PIP rewards.

Former PGA Tour member Bubba Watson also claims he’s owed the back end of his $3 million PIP reward for finishing in 10th place. Brooks Koepka, Phil Mickelson, and Dustin Johnson were also top ten PIP finishers but may or may not have received their checks.

The PGA Tour has certain criteria and requirements that are clearly not being met and these golfers aren’t considered to be in good standing on the tour, thus their PIP rewards are either on hold or nullified completely.