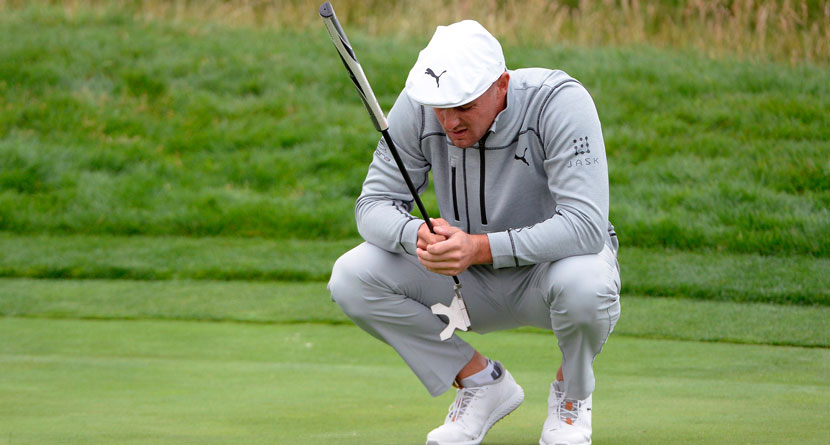 Golf’s many secrets are sought out daily by the best players in the world, and on Friday at the 3M Open in Blaine, Minnesota, Bryson DeChambeau claimed to have uncovered a formula for holing putts en route to a second round 62.

Making three birdies on his front nine — the back nine at TPC Twin Cities — DeChambeau rolled in six (!) more on his back nine to total 137 feet of putts made and put his total strokes at 51 over the first 36 holes.

Asked what changes or tweaks he made on the greens, DeChambeau played coy.

“The thing that has kind of changed that I’m not really going to tell. It’s a little secret,” DeChambeau said to Golf Channel’s Todd Lewis. “But it’s definitely been through a lot of practice trial and error and a lot of struggle, too.

“People don’t realize that I won a lot last year and obviously struggled a little bit, but they don’t realize that that struggle is what’s always going to make me better. That’s what I appreciate about myself and appreciate and about my family and my dad, because he told me never to give up, and those little points are going to make you better. So I really have to thank my family for that, and it’s made me a better person down the road, too, so it’s just a learning process, and I keep learning every single day.”

As others lower down the leaderboard made charges up it, DeChambeau cobbled together a hard-fought round of 1-under par to share the 54-hole co-lead with the likes of PGA Tour rookies Matthew Wolff and Collin Morikawa.

Wolff and Morikawa will play alongside one another in the final group by virtue of their posting 15-under par first. DeChambeau will tee off 10 minutes before the two rookies with Wyndham Clark, who sits one shot back.