Bubba’s Bunker Hole Out Seals the Deal at Riviera 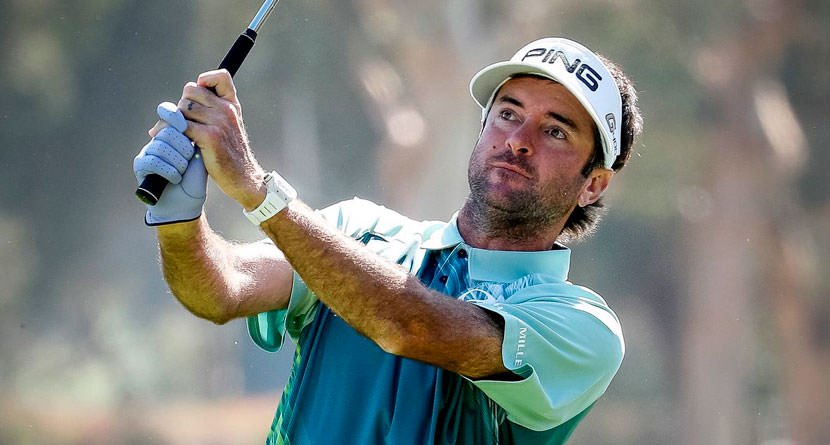 Being mired in a long slump that had him contemplating retirement – and seemingly distracted by celebrity duties – was not enough to keep Bubba Watson from history, as the enigmatic, long-hitting lefty added a 10th win to his career resume, winning by two strokes at the Genesis Open.

An awe-inspiring hole-out birdie on the par-3 14th hole was undoubtedly the final-round highlight for the 39-year-old Watson, who nabbed his third career victory at the Los Angeles-based event, which matches the hat trick of wins by legends Arnold Palmer and Ben Hogan.

Bubba’s caddie had a good feeling about this bunker blast. ⤵️????#ShotOfTheDay pic.twitter.com/oX4Wnjasng

Watson went viral for the wrong reasons on Friday when he got rejected emphatically by Tracy McGrady at the NBA’s celebrity All-Star game. But that bruise to his ego did not prevent him from reaching 12 under at famed Riviera Country Club, finishing two strokes clear of Kevin Na and Tony Finau.

Once a mainstay in the top 10 of the Official World Golf Rankings, Bubba Watson had fallen out of the top 100 entirely, dropping to No. 117 in the world.

After a 6-under 65 in the third round, his lowest round on Tour since the 2015 FedExCup Playoffs, Watson held the the 54-hole lead for the first time in two years. And being paired with two young stars in Patrick Cantlay and Cameron Smith was not too much for the two-time Masters champion, as a smooth 2-under 69, highlighted by a 3-under bogey-free back nine was all he needed to capture the tournament title.

It wasn’t a total breeze, however, as three front-nine bogeys put Watson’s best championship opportunity in recent memory in jeopardy. But he calmed down on his back nine, and a chip-in birdie from a greenside bunker on the par-3 14th hole gave Bubba a two-shot advantage and much-needed confidence coming down the stretch. After a birdie on the par-4 17th, a tap-in par on the 18th was more than enough to hold off his challengers.

With five birdies for the fourth-consecutive round, Watson’s 20 tournament birdies placed 2nd in the field, and a phenomenal Sunday putting performance helped offset relative troubles hitting his greens (9 of 18 GIR).

Special thanks to everyone who has supported me and cheered me on… it means so much! @genesisopen ???? pic.twitter.com/Ndb9OCaloA