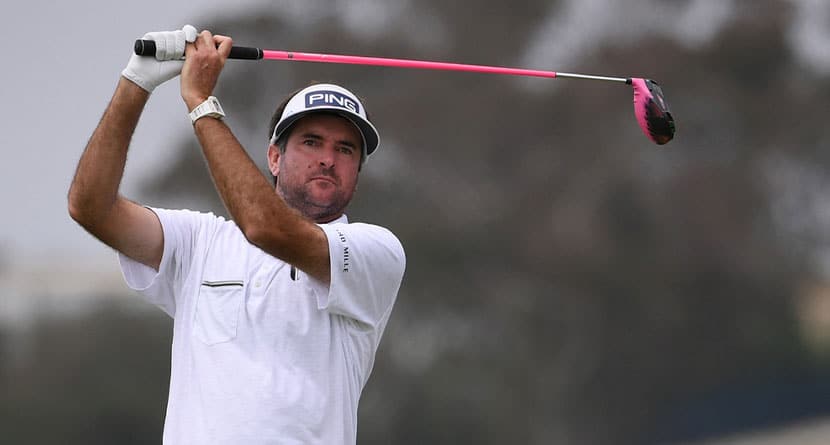 Bubba Watson can do things with a golf ball that most amateurs can only dream of doing. However, on Friday at the Travelers Championship, he did something that often makes its way into amateur golfers’ blooper reels.

Teeing off on the short par-4 second hole at TPC River Highlands, Watson pulled out his driver and hit a peeling cut 294-yards down the fairway.

“Yeah, it was a perfect tee shot right down the middle,” Watson joked after the round when asked to describe the scene on No. 2. “Chipped it in there and made the putt for birdie.

“It’s one of the things where the driver over time, overuse, my driver head popped off. It’s the shaft right above the hosel. It’s cracked, broke, whatever you want to call it. Nobody has ever been hit by it, and luckily (Dustin Johnson) was just out of the way and it didn’t reach the crowd, so nobody got hurt, hit. Nobody in my group knew where the ball was. Once you hit, you’re focused on where the driver head goes. If I was going to hit anybody, I was hoping it would be Brooks. But I missed him though. Not that good of an aimer.

“It’s one of those things that happened before and I always have a backup. They brought me the backup two holes later and I played with that the rest of the day.”

Despite his caddie’s best efforts, Watson couldn’t get the broken shaft dislodged from the clubhead.

Bubba’s caddie Ted Scott fulfilling the “other duties as assigned” part of the gig. pic.twitter.com/EUF2xud2dJ

On Saturday morning, Watson’s caddie, Ted Scott, gave some further explanation about Bubba’s gear and his driver shaft, in particular.

Under Rule 4.1, Watson was able to substitute his backup driver into play a few holes later.

As Watson mentioned, he was able to get up-and-down from 53 yards short of the green for birdie en route to a second nine 32 on Friday, which left him one shot back of the 36-hole lead.

It wasn’t the first time it had happened to him, either.

“The last time it happened might have been the Presidents Cup in Korea,” Watson said of the 2015 event. “I remember right before the first tee on the driving range (it snapped).”

Watson would go on to have a solid third round, firing a 2-under par 68 to tie for the 54-hole lead. He looked to be headed for his fourth victory at the Travelers, but he struggled down the stretch, playing his final five holes in 6-over par to go from holding the lead alone through 13 holes to finishing in a tie for 19th place.