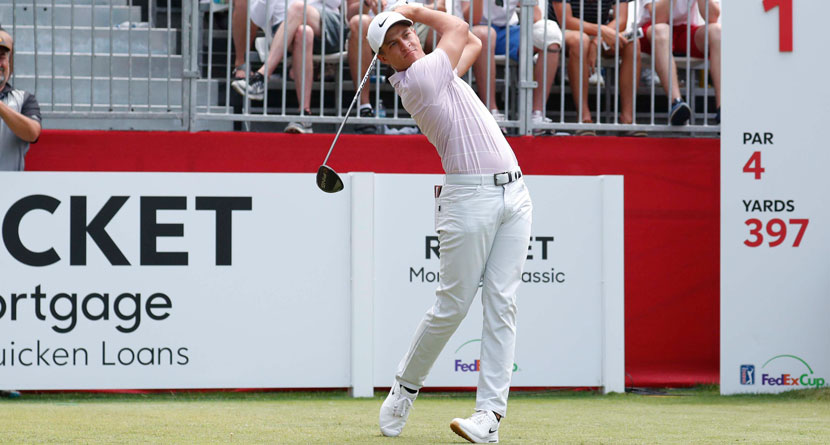 An incredible 8-under par front-nine 28 on Friday at the Rocket Mortgage Classic that featured six birdies and an eagle vaulted Cameron Champ into contention for the first time since the beginning of 2019, but Saturday’s third round was more of what Champ had become accustomed to.

Playing in the final group alongside 36-hole leader Nate Lashley, Champ had a tough go of things thanks to some squirrely drives, bad breaks and poor course management.

Champ’s struggles got underway on the second hole where a wayward drive forced a chip-out. He was able to make a 27-foot putt for a par save, but the writing was on the wall. After catching a bad break on the par-3 5th hole with his ball up against the back lip of a bunker that led to a whiff and hack out, Champ fell to 2-over par for the day, his one-stroke deficit had ballooned into six shots.

“I got a bad break on 5, duffed it almost twice. Just tried to keep it together after that,” Champ said. “Hit a few squirrely tee shots still again, just like the first two days.

As things continued to snowball, Champ’s day was epitomized in a bizarre situation on the 14th hole. After finding just one of the five fairways he hit in his round, Champ and his caddie, Kurtis Kowaluk, had a disagreement over club selection into the par-5 green.

Champ had hit a 303-yard drive dead center leaving him with 256 yards to the hole. After talking over the wind direction and play with his caddie, Champ picked up his bag, moved it next to his ball and proceeded to smash a 3-wood over the green as well as the grandstand that was behind it. The 331-yard shot came to rest 75 yards from the hole and in the 18th fairway.

After a lengthy delay as Champ waited for a ruling for relief from the grandstand, an official paced off Champ’s distance to the pin and had him take his drop over 100 yards away near the 16th tee.

“Thought the wind was into us and it really wasn’t. I hit 3-wood and probably should have hit a 3-iron, and air-mailed the green,” Champ said. “It was definitely different. I was not expecting the ball to go there.”

Champ was able to hit his third shot onto the putting surface and two-putt for par, but the damage was already done. On a day when the scoring average was nearly two strokes under par, Champ signed for a 3-over par 75 to tumble to 25th on the leaderboard, 13 shots behind his third-round playing partner, Lashley, who will take a six-shot lead into Sunday.

Lashley shot a third-round 9-under par 63 alongside Champ to put him in great position to win his first PGA Tour event on Sunday.