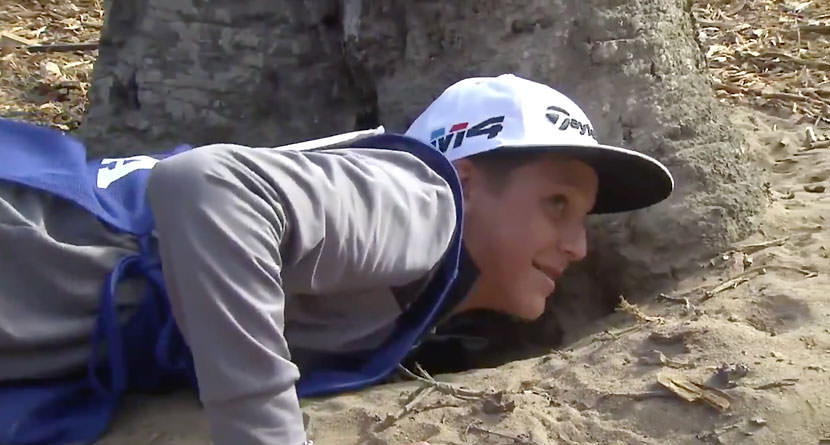 Father’s Day was on Sunday, but Dylan Block, caddying for his father in this week’s PGA Professional Championship atBayonet Black Horse Resort in Seaside, California, may have given his dad a gift that can’t be quantified on Monday.

With 20 spots on the line for the 100th PGA Championship at Bellerive later this summer, Michael Block made the last-minute decision to fly cross-country after missing the cut at the U.S. Open in hopes of teeing it up at the St. Louis course that is only two miles from where he grew up. That dream hit a serious snag during the second round of the tournament when a wayward drive on the 15th hole disappeared near a lone tree right of the fairway.

That’s when Dylan sprung into action.

With no idea where the ball could have gone except into an animal hole at the base of the tree, Dylan was able to spot a ball in the hole with the help of a cell phone flashlight. Undeterred and with a 13-year-old’s invincibility complex, Dylan stuck his entire arm down the hole to retrieve his dad’s ball, which resulted in Michael getting free relief from a “burrowing animal hole.”

Naturally, when handed a break like that, you have to capitalize, and Michael did. He hit his approach to 15 feet and sank the birdie putt.

“A hundred percent, I would not be here playing today if it weren’t for Dylan,” Michael Block said on Tuesday. “I would have been on the road right now heading back to work. For him to find that ball yesterday was absolutely crazy. He’s been amazing. To have my son out here, I couldn’t ask for anything better. And he’s just awesome. I have to constantly kind of slow him down because he’s so hyper, loves being out there and loves the cameras. The whole time I’m just holding him back, but it’s fun.”

Block ended the second round with an even-par 72 and with a new lease on the tournament, he went out and shot the best score of the third round with a 6-under par 66 to move him into a tie for third place.

The final round of the event takes place Wednesday afternoon and can be seen on Golf Channel from 6:30 p.m. to 9:30 p.m.