Champ Provides Best Moment Of The Year At Safeway 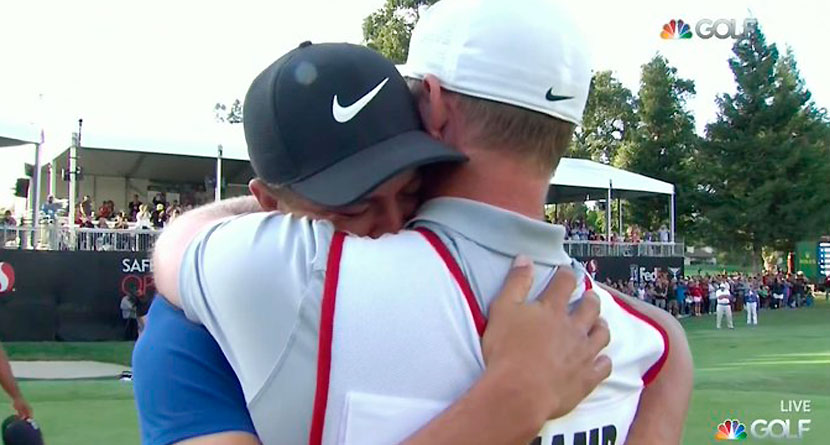 Sports are the best reality show going, and Cameron Champ proved why on Sunday at the Safeway Open.

With the man who taught him the game — his grandfather, Mack — watching from in-home hospice care 60 miles away as he battled terminal stage IV stomach cancer, Champ birdied the final hole at Silverado Resort and Spa to defeat Canadian Adam Hadwin by a stroke and claim his second PGA Tour victory.

Seemingly before the winning putt dropped, Champ already had tears in his eyes. After the customary handshakes and hugs with his playing partner and caddie, Champ’s father, Jeff, embraced him on the green with an interested spectator on speakerphone.

Cam hugging his dad, Jeff, with grandpa Mack on the phone. (@GettyImages) pic.twitter.com/yjPrTyL6O7

Champ’s family made the decision to hide the diagnosis from Cameron as he worked to finish off the PGA Tour season as well as defend his lone Tour title at the Sanderson Farms Championship last week. However, upon receiving the news last week, Champ decided to skip his practice rounds and pro-am this week to spend more time with his ailing grandfather at the family home 60 miles away in Sacramento.

“I think the whole week it just, there was nothing else on my mind. With everything going on, it just kind of blurred everything else,” Cameron Champ said. “Obviously golf, it’s my career and I love doing it. But it made me realize it’s not the most important thing, that there’s a lot more to life than just golf.

“I’ll say this now. I really feel like this will be, no matter what, even if I never win another tournament again or I win however many. This will definitely be the greatest moment of my golfing career.”

Champ showed the focus and determination instilled in him by his grandfather throughout the week, showing no outward signs of emotion or stress until that final putt dropped on Sunday evening in Napa.

With his grandfather in hospice care, dealing with stage-4 stomach cancer, Cam Champ says of his Safeway win: “To win here … this will be the greatest moment of my golfing career, for sure.”

One of the best moments of the year — in any sport. pic.twitter.com/X04ZKMoYR7

“Cam has always had talent. I’m not worried about that. But he also has to keep growing as a young man,” Cameron’s father said. “It’s just a matter of his growth matching up to his talent, and when that happens it’s going to be very special. It’s already special right now.”

Jeff Champ gives a message to his son @Cameron__Champ after an emotional Sunday in Napa. pic.twitter.com/ZX45rPfz2t

Thanks to the Tour’s new schedule, Champ’s victory at Safeway now earns more perks than previous fall events or opposite field events — like the Sanderson — had before, which means the long-hitting Texas A&M product will be in the field at the Masters next April.

“I think just knowing that I did it, that was my last gift to him,” Champ said of qualifying for the first major championship of 2020. “I told myself I’m going to make the Masters, I’m going to figure out a way, play my butt off.

“If he can hold on until April, that would be awesome. Obviously the circumstances are a little different, but I think just him knowing that I made it and I did it will definitely satisfy him.”