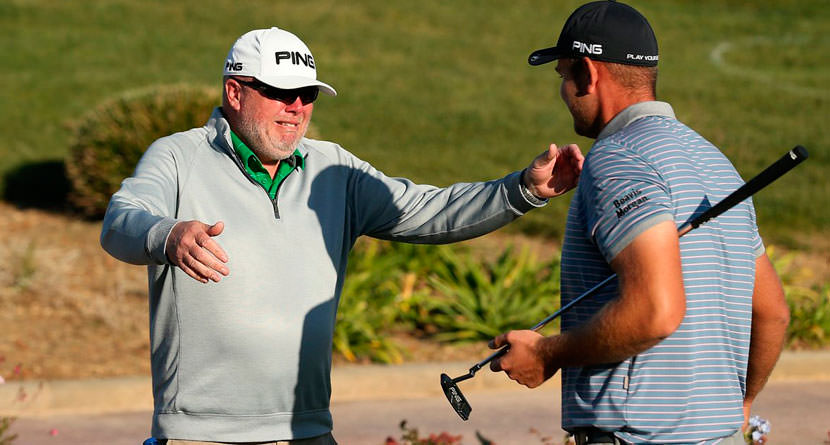 It’s going to take something crazy to happen in the last month and a half of 2017 to dethrone Jonathan Thomson from “story of the year.” The 21-year-old Englishman finished with back-to-back birdies this week to earn his European Tour card.

While anyone doing enough to be a card-carrying member of any major Tour, Thomson does it less than 10 years removed from a five-year battle with cancer.

The Associated Press added some more context to the accomplishment.

A 6-foot-9 English golfer who battled leukemia for five years as a child has earned his first European Tour card after finishing birdie-birdie in the final day of the grueling six-round Q-School tournament on Thursday.

Jonathan Thomson hugged his tearful father after shooting 2-under 69 at Lumine Golf Club in Tarragona, Spain, to become one of 33 players to get playing privileges for Europe’s main tour for the 2018 season.

The 21-year-old Thomson was diagnosed with a strain of Acute Lymphoblastic Leukemia at the age of 7, and went into remission after five years of chemotherapy. He represented England in tournaments at youth level and turned pro in September 2016, spending this season on the EuroPro Tour – the third tier of European golf.

“I know who will be leading the driving distance stat next year,” said European Tour player Tyrrell Hatton, a good friend of Thomson’s.

Sam Horsfield shot a final-round 63 to win Q-School by eight strokes on 27 under. Having come through the first and second stages of qualifying, Horsfield played 252 holes to get his European Tour card.

Thomson told his hometown paper, The Yorkshire Post, that the accomplishment hasn’t fully sank in yet.

“It’s not really hit home yet. It’s so emotional, it’s been such a long journey for us to get to this point and it’s hard to let it all sink in,” said 21-year-old Thomson, who – between the ages of seven and 12 – endured extensive chemotherapy treatment to combat acute lymphoblastic leukaemia, which went into remission.

“My dad’s (Nigel) been here with me through it all. It’s been some tough times, but here we are and it’s great. We had a hug and a tear on 18 and I’m looking forward to getting a beer now.”

Amazing few weeks – I now have a @EuropeanTour card! So good to celebrate all this with my friends and family! #friends #family #hardwork ???????? pic.twitter.com/NwaF5RRjDj