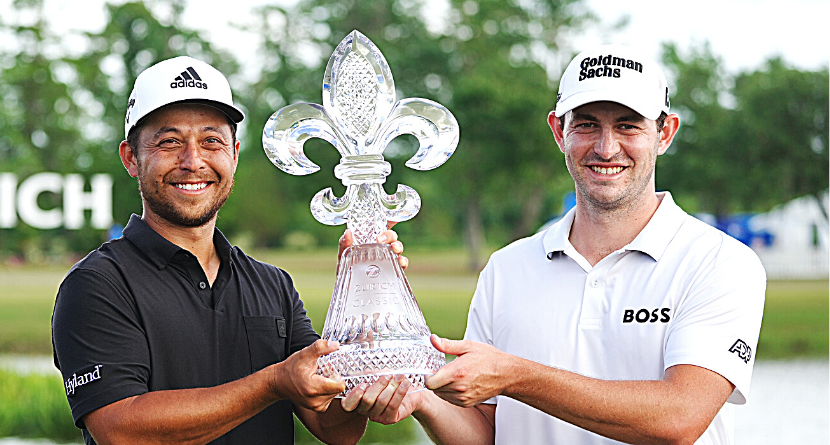 Patrick Cantlay’s swing coach Jamie Mulligan summed up the chemistry between his client and his playing partner Xander Schauffele like this:

“They’ve played enough with each other as partners that they’re kind of finishing each other’s sentences.”

So let’s test that theory. Patrick, Xander, how would you describe your record-breaking performance at the Zurich Classic?


“We definitely bring out the best in each other and we really enjoy being out here together and in a format like this,” Cantlay said. “It’s the best.”

And from Schauffele: “He brought the best out of me on the course.”

Setting the tone with a record-breaking 59 on Thursday and putting the lead out of reach with a 60 on Saturday, the Cantlay-Schauffele partnership put the finishing touches on a wire-to-wire victory at TPC Louisiana with an even-par 72 on Sunday to set a new scoring mark in the Tour’s only team event with a 29-under-par 259.

It’s the seventh career victory for Cantlay, the reigning FedEx Cup champion who twice this season has come out on the wrong end of playoffs — including last week at the RBC Heritage. Meanwhile, Schauffele — the 2020 Olympic gold medalist — ended an even longer dry spell that saw him rack up eight runner-up finishes between victories. The win was Schauffele’s fifth on Tour and the first since the 2019 Sentry Tournament of Champions.

Struggling in windy conditions to recapture the scoring magic that made them such a force during the event’s best-ball days (Thursday and Saturday), the duo finally broke through for an eagle on the par-5 seventh hole set up by Cantlay’s pinpoint approach from over 250 yards.

“It jump-started the round,” Schauffele said. “Just one of those shots you kind of see on coverage and you’re like, I don’t know how that ball got there. It was a pretty thing to see live from my angle from the fairway. So I was happy to sort of clean it up for him since he hit such a great shot in there.”

Still, the alternate shot format is always more challenging for even the hottest of teams, and Cantlay and Schauffele leaked oil coming down the stretch. The team of Billy Horschel and Sam Burns closed the gap considerably, but a bogey at the 17th hole all but assured the leaders of posing with the championship belts.