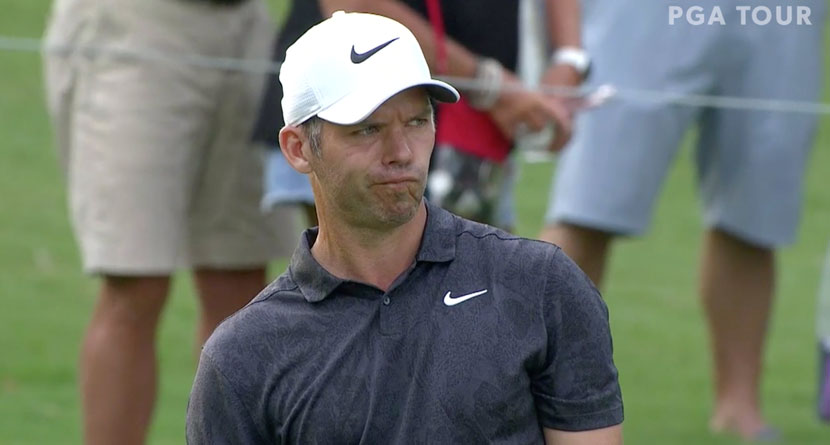 Paul Casey ended up having a very lucrative week at the Tour Championship, but as the Tour gears up for the start of its new season in two weeks, the video editing team was still hard at work wrapping up the FedEx Cup Playoff finale on Wednesday.

Skratch, the PGA Tour’s less reverent and more cavalier social media channel, took a funny mistake from the second round and posted it to social media on Wednesday to share the story behind a befuddled look from Casey. Casey was asked about his second shot into the par-5 18th hole that one-hopped over the back of the green and resulted in a par on the second-easiest hole on the course.

“Dammit, I didn’t want you to ask that,” Casey said with a wry smile. “So I get the yardage from (my caddie) Johnny (McLaren). We discuss where am I going to land it — land it 234; the pin is 248. I go to grab the 4-iron and set up, hit a beautiful shot — I mean, it couldn’t have been any better looking — and as it one-hopped over the back. I just saw on TV Johnny looks like he’s in trouble. He’s got his hand on his mouth, biting his tongue.

“I didn’t give him a glare or anything, but I’m thinking to myself, ‘has he just given me a mystery?’ And then I look down and realized I hit the 3-iron, not the 4-iron. Because, you know, we’re not playing for much this week and it’s not important.”

The story behind this fantastic @paul_caseygolf reaction…

The funny part is that this isn’t the first time Casey has pulled the wrong club.

“My 3-iron and 4 iron are actually the same head,” he explained. “One is bent stronger than the other, and so clearly, I can’t tell the difference when I put them down. One’s got a little “4” on it, and the 3’s got nothing on it. The sad thing is it’s the second time I’ve done it this year. We did it somewhere else, I can’t remember where.”

Luckily for Casey, the mistake didn’t cost him any cash. He would go on to finish in solo fifth place, four strokes behind Brooks Koepka who tied for third. Maybe if he had pulled the right club on Friday, however, he wouldn’t have had to lag his 5-foot birdie putt on the 72nd hole to ensure he made his $2.5 million.

When you know two putts or better earns you $2.5 million, you lag your five-footer ? pic.twitter.com/7D05gxMmie