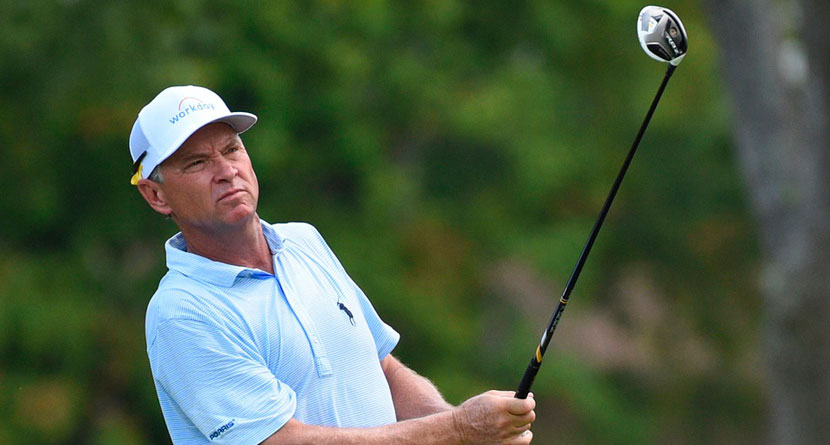 After confirming to multiple media outlets late last week that longtime CBS Golf broadcasters Peter Kostis and Gary McCord would not have their contracts renewed for 2020, the broadcast home of the Masters and PGA Championship announced on Tuesday that Davis Love III would be joining the CBS Golf announce team next year.

“Davis is one of the most accomplished and respected players in the game of golf,” said Sean McManus, the chairman of CBS Sports, in a release. “With his playing experience, reputation and relationships across the golf community, he brings a unique perspective and insight that will enhance our broadcasts. Davis is the perfect fit for CBS, and we look forward to him making the best broadcast team in golf even better.”

Love, a World Golf Hall of Famer who last won on the PGA Tour four years ago at the Wyndham Championship at the age of 51, will begin his career calling golf at the 2020 Farmers Insurance Open, CBS’ first golf broadcast of the new season.

“I have long considered CBS Sports the gold standard in golf coverage,” Love said in the release. “Whether playing or coaching, I have always loved the team aspect of golf, and I am thrilled to now be a member of the best team in television. My playing days are not totally over, as I will play select events, but my focus now shifts to broadcasting. I have been fortunate to spend a lot of time with the men and women of CBS Sports, and I look forward to getting started in January.”

Just off the phone with Davis Love about his move to CBS. Here’s what he had to say about his new role, how it came together, what kind of analyst he’ll be & more: https://t.co/4ZPTZMf76O

According to McCord, a reason McManus gave for shuffling the chairs at CBS was that executives felt the coverage had become “stale.” With news of the Love hire making the rounds, many were quick to point out that the 21-time PGA Tour winner doesn’t seem to be much more outspoken than the men he’s replacing, but Love gave fans looking for more sharp commentary hope with some of his comments to GolfDigest.com’s Brian Wacker.

“That’s one of the first questions that came up,” Love said. “I have opinions. I just have to learn when to say things.  Johnny (Miller) was really good at that. I learned a lot by watching him. My only problem is that I have to get my thoughts more concise. Even watching Tiger this past weekend, I was wondering why someone maybe didn’t say certain things. And there have been times when I’ve called the truck when they missed something.

“I know the courses and the players, and there might be a situation when I might have played with a guy the week before and saw he was struggling with his chips, so I’ll be able to convey that. I’ll know what’s going on. That’s why Romo is so good. He went right from playing to the booth, and I’m going to talk to him about how I transfer that knowledge to the fans. He’s one of the best at it.”

Unlike Romo, Love won’t be giving up his playing career completely — he’s in the field this week at the inaugural Bermuda Championship and plans to play more as his schedule allows — but he told Wacker he’s making a “full shift” to broadcast.

With his first event nearly three months away, Love said that he is unsure of what his role will be just yet, whether it’s on the ground or in a tower, but he and his new teammates will be going through a broadcast boot camp of sorts in which he will watch tape and practice calling the action together before they go live at the end of January.

“I don’t know what my role is going to be yet; we’re going to figure it out,” Love said. “I thought at first that sitting in the tower would be easier, but maybe it’s walking. I won’t know until we practice.”