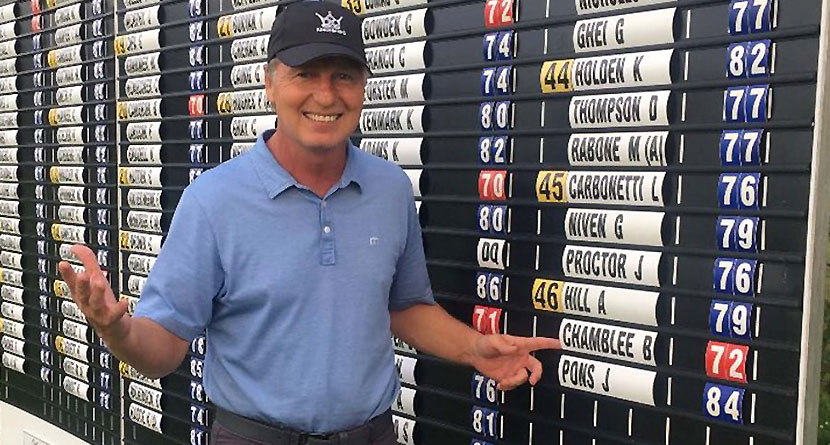 Brandel Chamblee is a lightning rod in the golf world.

While there are those who enjoy his stubborn and, at times, controversial style of commentary, there are far more (vocal) detractors of the Golf Channel analyst. However, for those who argue that he talks the talk without walking the walk, that argument got a little weaker with Chamblee qualifying for the Senior Open Championship for the second consecutive year.

“I’m delighted to have made it (to Royal Lytham),” Chamblee said after his round. “This was a pretty stressful day. Last year I felt much more comfortable and confident about my game. I didn’t touch a club last week.”

Chamblee was on the scene at Royal Portrush for the 148th Open Championship all last week, manning the Live From desk and making various other hits for local and international media. From there, Chamblee hopped islands to England for the Monday qualifying at Fairhaven Golf Club, just down the street from Royal Lytham & St. Annes.

Props to @chambleebrandel. Worked a full week at Portrush, refereed countless pint-fueled media hotel discussions/debates, hopped a flight this morning to England, went to the course and got a spot in the Senior Open for the second straight year. https://t.co/5ZIwp9Cert

Chamblee fired a 1-under par round of 72 to finish in eighth place at his qualifier, which had 14 spots up for grabs.

“Ordinarily, I drive the ball really, really well, but today — yeah, I hit three or four really good drives — I hit some stinkers,” he said. “(Fairhaven) has got so much trouble, and I was in trouble almost every other hole.”

Chamblee qualified for last year’s Senior Open and then shot rounds of 77-75 to miss the cut at The Old Course at St. Andrews. The Texas native said he’s very comfortable with this year’s venue as he vacationed in England and played the course a lot as a kid.

As one of 49 Monday qualifiers, Chamblee will have to outduel the other 95 over-50 players who qualified, which includes the likes of Bernhard Langer, Darren Clarke, Tom Watson, Fred Couples and defending champion Miguel Angel Jimenez.

Chamblee will tee off on Thursday at 10:08 a.m. ET alongside fellow Americans Gibby Gilbert and Bret James.