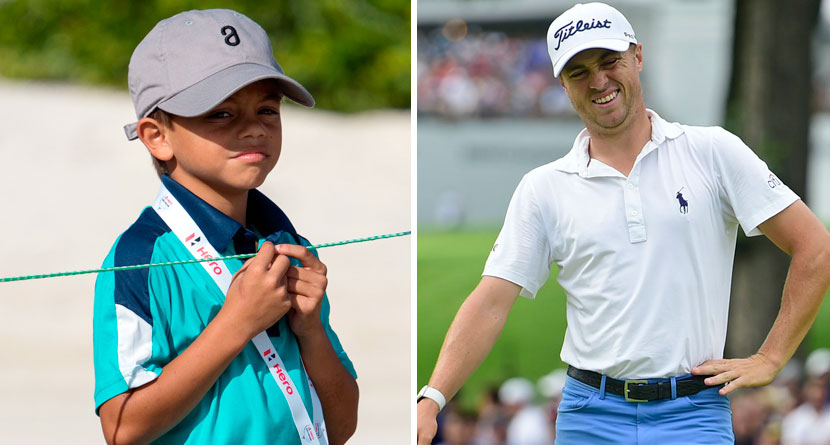 The Woods apple doesn’t fall far from the tree.

Like Tiger’s father, Earl, before him, the 15-time major champion appears to have a “mini-me” situation on his hands with son Charlie. Already this year, we’ve seen Woods and his 10-year-old son in lockstep cheering on Rafael Nadal at the U.S. Open, but Justin Thomas shared a story about the younger of Woods’ two children on a recent podcast.

Speaking to Chris Solomon of No Laying Up, Thomas set the scene inside the clubhouse of Augusta National Golf Club earlier this year as Tiger was on his way to claiming his fifth green jacket. Thomas, who finished T12, headed inside to watch the end of the tournament after his final round and he ran into Team Tiger.

“I have a pretty good story,” Thomas said. “Charlie, his little boy, he’s amazing. The apple definitely doesn’t fall far from the tree there. He’s identical to Tiger and just such a little smart aleck.

“I was like, ‘thanks man, appreciate that.’ I got a good kick out of that.”

It’s hard to say how deep into the PGA Tour statistics scene Charlie is, but he knew where to needle Thomas where it hurt. Last year on the PGA Tour, Thomas finished 144th in strokes gained: putting, losing 0.184 strokes to the field on average, which he chalked up to getting too mechanical when he was coming back from a wrist injury.

You can listen to the complete hour-long conversation with Thomas here.