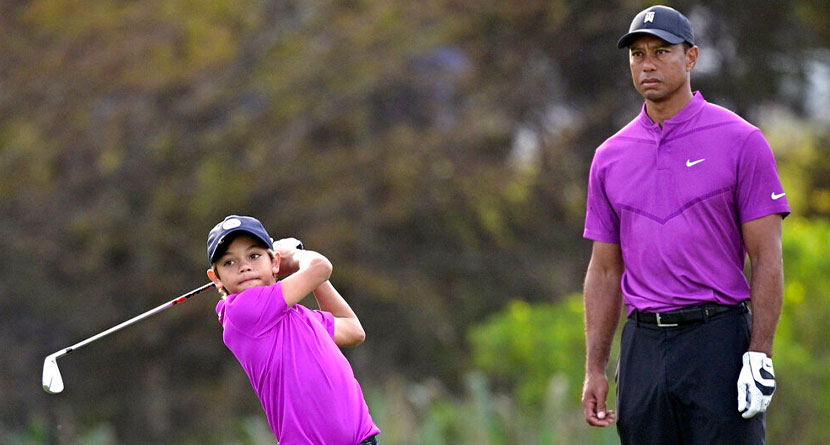 Back in August, Team USA captain Davis Love III announced that Tiger Woods would not be an assistant for the President’s Cup that would take place the following month.

Steve Stricker and Webb Simpson were appointed as the final two assistants — in addition to Zach Johnson and Fred Couples — in lieu of Woods as he continued to recover from leg injuries suffered in 2020. This came as a bit of a surprise for fans of the team golf event, especially after Tiger was a player-captain in 2019.

As Team USA secured the victory and celebrations ensued, Charlie Woods was busy firing a personal best 4-under par 68 in his final round for a junior qualifier this past weekend, and he did so with his father on the bag. Suddenly, the absence from the President’s Cup makes far more sense knowing that Tiger Woods was at home in Florida caddying for his 13-year-old son.

En route to a fourth-place finish in his age division (12-13) at a qualifier for the Notah Begay III Junior National Golf Championship, Charlie went low on Sunday after an opening round of 80 in the 36-hole event.

His impressive final round was one to remember; he made a kick-in eagle (lipping out an albatross), four birdies and two bogeys at Mission Inn Resort, just outside of Orlando, to log the low round of the day.

The overall winner was 15-year-old golf prodigy out of Ukraine, Misha Golod. While he wasn’t able to secure a spot in the national championship upcoming in November, this was no doubt a memorable weekend for Charlie.

Charlie and Tiger make a dynamic team – this has been on display previously in the PNC Championship the last two years in Orlando where they’ve partnered up on the course.

As you might guess, the 15-time major winner has sage advice for efficient playing and managing nerves on the course.

As Tiger’s appearances on the course have become more scarce, his involvement with Charlie’s golf development has been on full display.

Tiger continues to rebound physically, but he seems content to mold his son and spend valuable time with him on the course, and the 13-year-old Charlie has shown flashes of brilliance. With any luck, the next generation of golfers will be able to enjoy Charlie Woods the way we’ve enjoyed Tiger over the years.