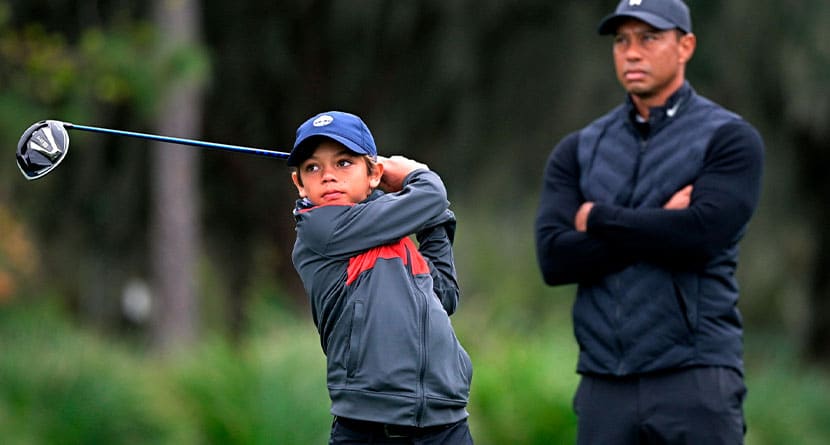 It’s not uncommon that the PNC Championship — formerly the PNC Father-Son — goes unnoticed by the majority of sports fans, and even the majority of golf fans, towards the end of each year.

With the holidays breathing down everyone’s collective necks and college and professional football and basketball taking place, it’s tough for a hit-and-giggle golf event in Orlando to make headlines, but this year is different: Tiger Woods is playing, and so is his son, 11-year-old Charlie.

Beyond being Tiger’s son, which in and of itself is enough to garner many wandering eyes, Charlie has proven over the past few years to be the possessor of quite the golf game.

With his swing making its way onto various social media channels and his junior golf triumphs making headlines, a junior golfer shrouded in some semblance of privacy is being brought into the limelight alongside his superstar father this week at The Ritz-Carlton, Orlando.

Although the 36-hole two-person scramble event doesn’t officially kick off until Saturday, many of the familial twosomes were on the property doing some practice and prep work for the event on Thursday, and unsurprisingly, the Woodses were the center of attention.

On the tee, Charlie Woods.

“He’s been playing junior golf tournaments, and he’s been out and had people video him,” Tiger said of Charlie’s not-so-private golf journey. “This is a different world that we live in now. Everyone has a phone and everyone has an opportunity to video, and he’s been out there and he’s enjoying it, so that’s the whole idea.”

“We’re trying to figure out how to get around here and get a win.”

We caught up with @TigerWoods ahead of this week’s PNC Championship. pic.twitter.com/A0t7ttamRM

Fans will get the full Woods experience over the course of the weekend as Tiger and Charlie will play alongside Justin and Mike Thomas, close friends and apparently, Charlie’s swing coach.

“Mike’s been impactful in him enjoying the sport and it’s so much fun for me to see Mike share a lot of his ways that he was able to spend with his son and we’re enjoying that,” Tiger said.

The Woodses and Thomases tee off in the final pairing on Saturday, beginning their rounds at 11:48 a.m. EST.

Coverage will begin on Peacock, NBC’s streaming channel at 1 p.m., on Saturday and continue on NBC from 2:30-5 p.m. Sunday’s coverage will air from 2-3 p.m. EST on Golf Channel before wrapping up on NBC from 3-6 p.m.