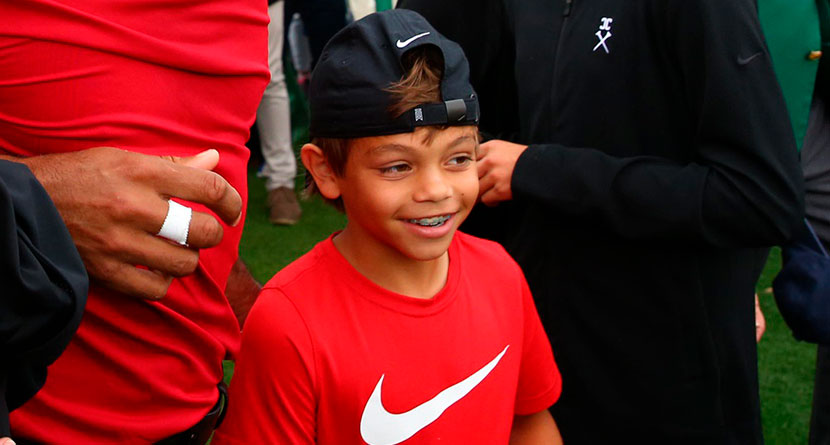 Tiger Woods is used to being the center of attention when he’s at the golf course, but it was his son, Charlie, who stole the show over the weekend.

The 10-year-old Woods had his old man on the bag as he competed in a junior tournament and while Tiger sightings are always of interest to many golf fans, Charlie’s swing was the most interesting thing to emerge.

With his father/caddie looking on, a video emerged of Charlie on the range making a pretty impressive pass at the ball.

The swing of Charlie Woods ?

Tiger looks on as his ten year old son swings on the range ahead of a junior event in Florida. pic.twitter.com/0WvwCw1hST

According to Golf Channel, Charlie Woods would go on to fired a 5-over par 41 in the event.

So amazing. Could watch this all day… for many reasons!

More pictures and videos emerged of Woods caddying for his son. It appears that Charlie already has the new TaylorMade SIM driver in the bag.

???• #NEW: Tiger caddying once again this morning in Florida on route to a 2nd place finish for Charlie, shooting even par. A SIM driver in the bag already ??. Probably the last update about any of this. He’s young and it’s just important that he has fun. Hopefully something he and Tiger enjoy doing together. (Via @leoniegolf)

???• #NEW: A Tiger sighting this afternoon in Jupiter at Club Med Academies. Appears to be in golf clothes and caddying for Charlie ? #TigerWoods (via Club Med Academy / CMAGolf on Twitter).

There are perks to being Tiger Woods’ son that go beyond the genetics that produced that enviable golf swing.

Tiger is scheduled to be back in action in two weeks at the Farmers Insurance Open on the PGA Tour.