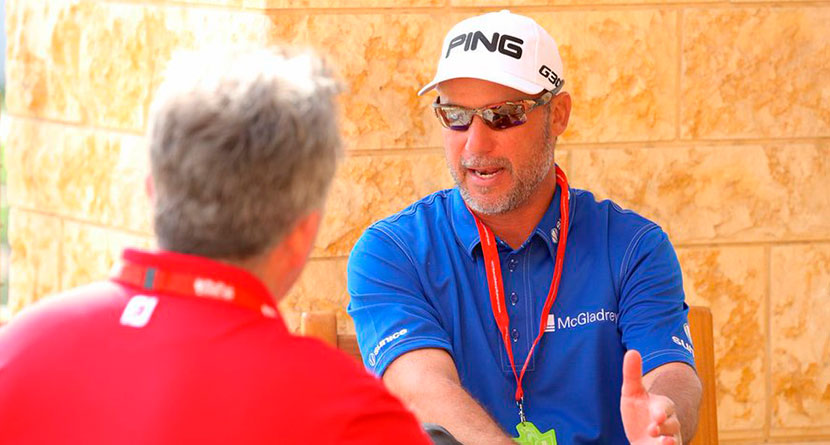 While many Tour pros past and present have been reticent to step out on a limb when it comes to the most recent controversy surrounding Patrick Reed’s two-stroke penalty at the Hero World Challenge and subsequent fallout, three-time PGA Tour winner Chris DiMarco isn’t one of them.

Following the completion of the four-hole playoff that saw Justin Thomas outlast Patrick Reed and Xander Schauffele to win his 12th PGA Tour event, DiMarco let loose a tweet that made his feelings about Reed clear.

Following Thomas’ birdie on the par-5 18th, the third time the pair played the 677-yard finisher at the Plantation Course at Kapalua, Reed was corralled by Golf Channel reporter Curt Byrum and asked about coming up short.


“It’s all about winning,” Reed said, asked if his 7-under par day and giving himself a chance was good enough. “At the end of the day, I did what I had to do today, I mean, I went out and had to go shoot a low number – especially with how windy it was today – to give myself an opportunity, and I did. Unfortunately, I had two putts to close it, and one of them I got gusted on and this last one, with the wind and the break, it got me again.”

Asked about a three-putt from the front of the green on the second playoff hole that allowed Thomas to push the playoff to a third hole, Reed explained that he misread the large green.

“The thing is there’s a huge-ass mound right in the middle of (the green),” he said. “I thought I played it high enough… I did, it just wasn’t as fast as I thought. It almost was easier from farther right where you don’t have that big ridge to deal with than you are right on line.”

DiMarco didn’t like Reed’s explanation, taking it as the 2018 Masters champ making an excuse for his mistake.

“Is there a bigger d**k in the world?” DiMarco asked rhetorically in a now-deleted tweet of the interview. “Own your stuff. Always excuses. Just say you cheated and you got beat!” DiMarco spent the next few minutes weathering the storm that came his way via replies from his followers pointing them in the direction of the video from the Hero World Challenge and sharing his viewpoint that Reed “didn’t make a mistake; he cheated.”

DiMarco went on to say that Reed is “an amazing golfer,” but that he finds Reed “hard to like or pull for.” And as for the response that Reed’s infraction happened “a month ago in a silly season event,” DiMarco pointed out the long memories in golf. “Cheating in golf stays forever,” DiMarco wrote. “It’s not like holding a football. Integrity is all you have in golf.”