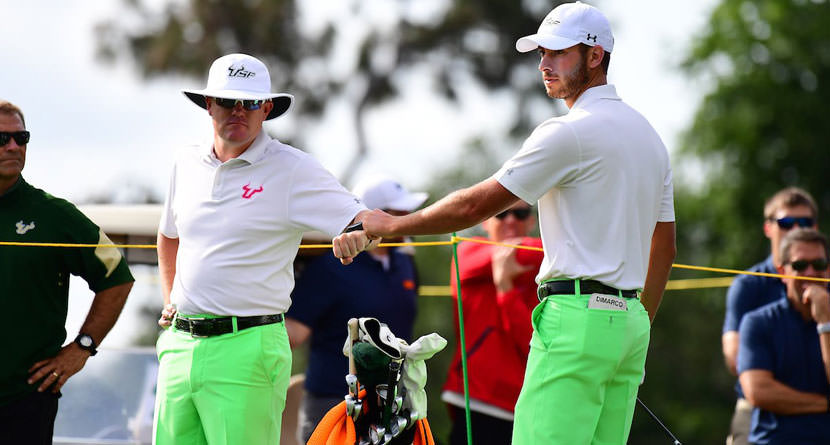 The United States Open is the most democratic championship in the world, to borrow a line from Tin Cup. Anyone with a 1.4 handicap and a few dollars can sign up to play in local qualifying with the hopes of playing alongside the Tiger Woods, Dustin Johnsons and Jordan Spieths of the world.

Chris DiMarco’s son, Cristian, got to call a man who was one of the best players in the world for about a decade “Dad,” so he’s used to being on the biggest stages in the game. If he’s going to play in this year’s U.S. Open, however, it will be because someone else dropped out.

Playing in the local qualifier in Orlando with his dad on the bag, the University of South Florida golfer fired an even-par 72 at Orange Tree Golf Club, which ended up tying for the fifth and final spot with LSU golfer Luis Gagne. Neither DiMarco nor Gagne were present for a playoff, so their U.S. Open fates came down to chance.


LPGA Tour pro Christina Kim, a member at Orange Tree, was on hand when the decision was made.

Well that’s a first.. local USO qualifier at my course today, 2 guys tied for last spot into sectionals. They BOTH left, so a coin was tossed to determine who got the spot and who is the first alternate. Bizarre. Apparently this is the correct move.

The one that lost the coin toss actually called the pro shop when I walked in and did not enjoy the results when given to him. I can assure he will never bolt early again. https://t.co/t6fHwvwRgI

“The Florida State Golf Association, which conducted the qualifying, proceeded correctly per procedure to flip a coin when both players were not present to decide the final spot in a hole-by-hole playoff,” the USGA said in a statement to GolfDigest.com. “If the playoff had involved more than two players, the spots would be decided by lot. It is unfortunate that the players did not remain on property to determine the last qualifying spot through their play.”

Actually I had no emotion about the result but that of disappointment with myself! I had made a joke saying that “he should have given me a good flip” that is all. But you are right it will be a learning experience and I will never “bolt” early ever again!

“We thought we had no chance,” Cristian said, according to GolfChannel.com. “We thought it was a foregone conclusion.

“I called (Gagne) and was like, ‘Well, I didn’t put up that much of a fight to you, buddy.’ We had a good laugh about it. Neither of us thought we’d get in. But that’s how it is. It’s a learning experience. I’m very disappointed in myself for leaving, but in the grand scheme of things, is it really going to make a huge difference in my career? I hope not. I hope I’ll play in many U.S. Opens.”