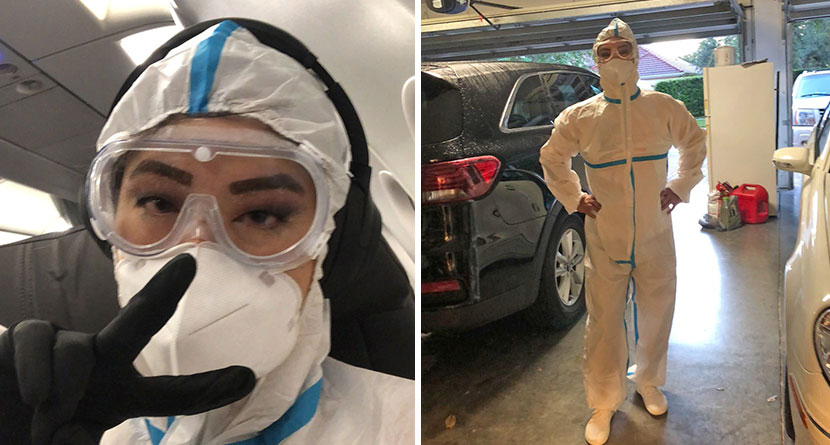 LPGA Tour winner Christina Kim has most recently been seen and heard as a rising-star broadcaster for PGA Tour Live, but as the LPGA Tour prepares to make its return to golf this week in Ohio, Kim made some waves on Monday not because of where she was going, but for what she was wearing.

Leaving the confines of her home state of Florida for one of the first times since the coronavirus pandemic outbreak earlier this year, Kim took every precaution en route to Toldeo by wearing a head-to-toe hazmat suit on her two-part plane ride north.

“Safety first for my flight to Toledo. No chances being taken,” Kim said in a series of posts on Twitter. “If it’s jarring to you, that’s more a you problem than a me one. I thought of it as being considerate to my fellow passengers, my caddie, my tour and to my family, whom I would have to quarantine with if I tested positive.”

Safety first for my flight to Toledo. No chances being taken. pic.twitter.com/Rxk1oe7VtG

Have your opinion. I respect it. Coming after someone you don’t know, though? Especially with an elitist mindset? That’s weak shit.

Kim, not one to holster an opinion, spent a good amount of Monday in the air and responding to social media users who were critical of her attire.

According to Kim, she purchased the suit for $30 off of Amazon and the goggles for an additional $15.

I mean bidness. I’ll sweat and swear through this damned thing for as long as is necessary. Gloves, too, damnit!!! pic.twitter.com/nCudIJsw5g

Kim arrived in Ohio on Monday night after a layover in Charlotte, and on her to-do list was sanitizing her rental car, getting a Tour-sanctioned COVID test, check into her AirBnB, workout and do meal prep.

Second leg about to get underway! So excited to get closer to Toledo!! Schedule includes:
Grab/sanitize rental car
Drive to get COVID test
Check into Airbnb (remove gear prior to checking in)
Workout at home
Grab groceries
Meal prep for as many days as possible.

From there, it’s picking up where she left off. Prior to the shutdown, Kim posted a pair of top-10 finishes in early February at the Vic Open and Australian Open.