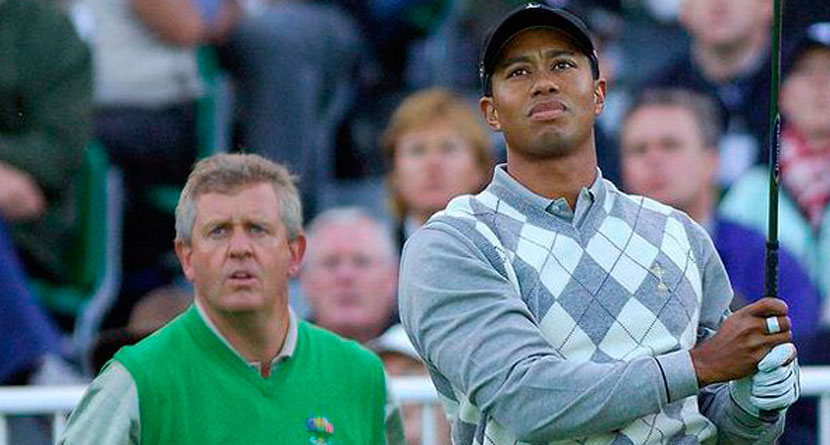 Tiger Woods coming face-to-face with his golfing mortality has left not only fans but also his peers in an interesting situation. While he continues to struggle in his attempt to get back on the course, more and more people are jumping to the conclusion that Woods’ competitive career may have already come to an end.

As such, we’re getting revisionist stories like the one published on Golf.com this week by Michael Bamberger in which the SI scribe steps aside and lets Colin Montgomerie have all of his column inches to eulogize the career of “the best (he) ever saw” play the game.

Among the interesting tidbits from Monty’s memory bank was his rationalization that despite all of Woods’ success, the Scot wouldn’t trade careers with him even as he heaped praise upon the 14-time major champion.

“I never won a major. Tiger won 14. But would I trade my career for Tiger’s? No. I started out this game a pretty good golfer and finished in the Hall of Fame. I feel I have overachieved. So how could I say I wish it were better? People will say, `Well, he didn’t win a major.’ And, yes, I would have liked to shut them up by winning one. But that’s my only regret, really. Great that I have won senior majors, which has quieted the odd person.

“I’ve made mistakes. We all make mistakes. But I’ve had a long career. I don’t think Tiger will be out here at 53. He might say, `I don’t need the money.’ But it’s not just money. It’s self-esteem. Self-esteem is huge in life. You walk a wee bit taller, having done something well. I like this life. I like meeting new people. I like the travel. I love the life. Whether it’s for everybody, I can’t say.

Monty also gave a first-hand account of playing alongside Woods at the 1997 Masters and his hypothetical predictions on Woods’ career totals had he not had his public scandal, changed his swing or played during the golf technological boom.